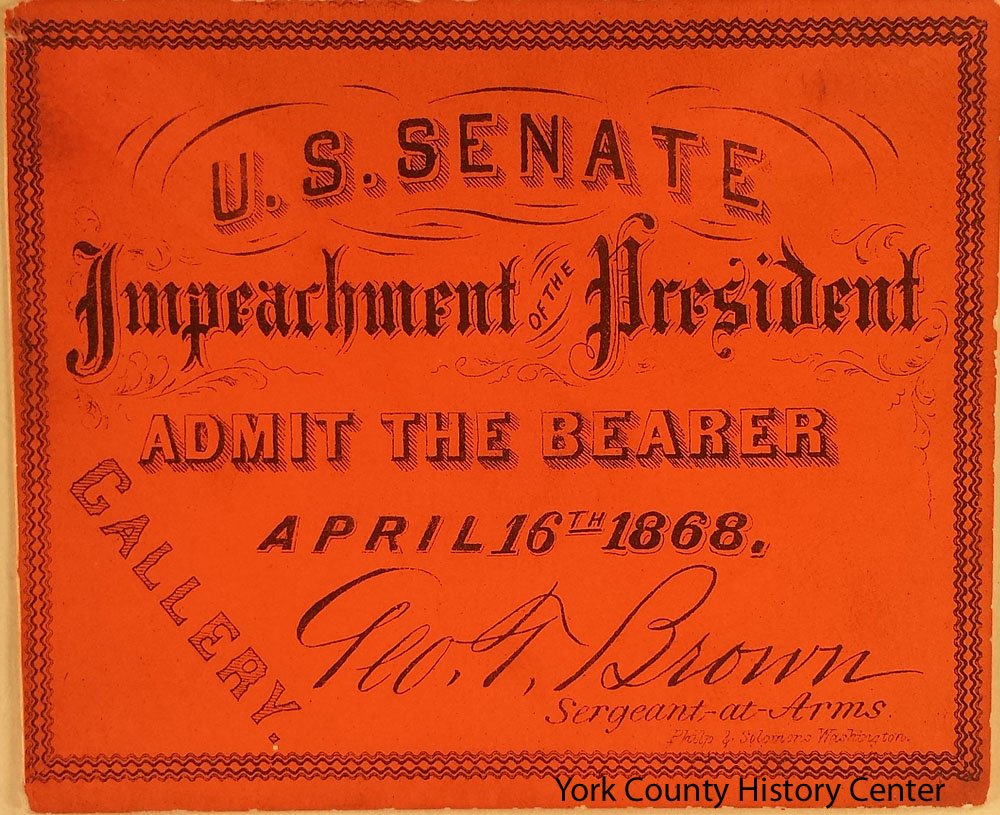 We hear the word “impeachment” bandied about; do we really know what the word means and how the process works?  I am no expert by far, but I did learn a lot while researching my recent York Sunday News column. 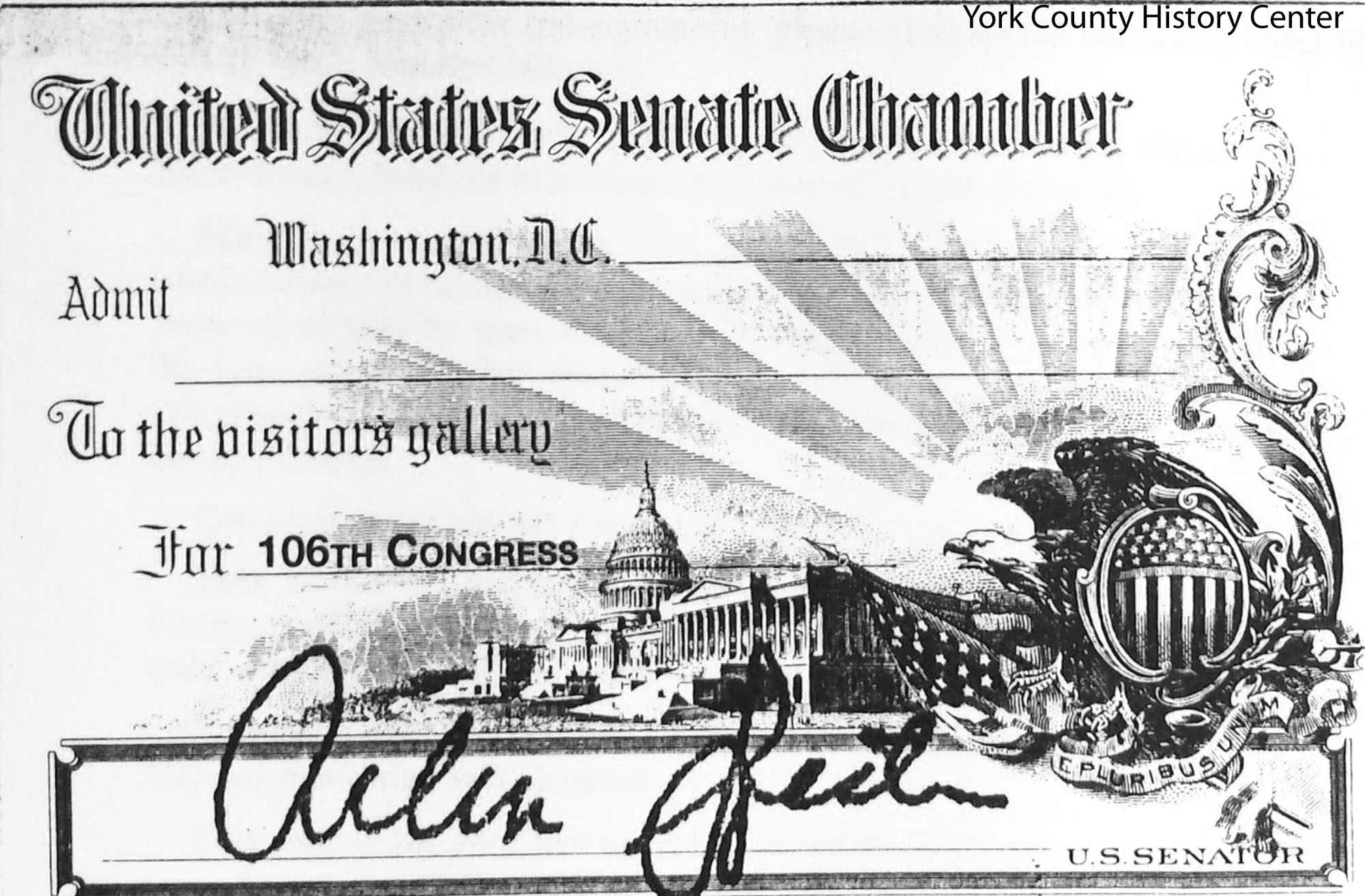 The column came about when I recalled that the York County History Center Library and Archives has gallery observation tickets from each of the only two impeachment trials of United States presidents.  My recent YSN column is below as well as some links for more information.

York countians have always been interested in politics.  The York County History Center Library and Archives collections show this in newspapers going back over two centuries, as well as in letters, diaries and broadsides.  Two intriguing items are original tickets to both presidential impeachment trials.

Dictionary.com defines impeachment as: “(in Congress or a state legislature) the presentation of formal charges against a public official by the lower house, trial to be before the upper house.” Two United States presidents have been impeached by the House of Representatives and tried by the Senate, Andrew Johnson in 1868 and Bill Clinton in 1998-1999.  Neither was found guilty, although Johnson escaped conviction by only one vote of the required two-thirds majority.

I am still trying to determine the origin of the bright orange ticket in the YCHC collections, dated April 16, 1868, to the Senate gallery during Johnson’s trial.  In early 1999, however, as the then Historical Society of York County librarian/archivist, I was pleased to accept two tickets to the Senate gallery for the Clinton trial.  One is signed by Senator Arlen Specter of Pennsylvania and the other signed by Senator James W. Ziglar, who was serving as Sergeant at Arms and Doorkeeper of the Senate at that time.  These tickets were generously donated by then Mt. Wolf residents Tim and Joyce Santiago and their son, Cody, who was age seven.  The Santiagos drove to Washington on January 19; a newspaper article quotes Tim Santiago: “I knew this was an important part of our history and I wanted my family to be part of it.”  He was also pleased that they could donate the tickets to the historical society, where they knew they would be properly preserved and available for research and exhibit.

Republican Abraham Lincoln and Democrat Andrew Johnson were elected in 1864 on the National Union Party ticket.  When Johnson became president upon Lincoln’s death, his states’ rights views and leniency toward the states of the former Confederacy clashed mightily with the Radical Republicans in Congress, who held a majority.  Johnson vetoed the Freedmen’s Bureau Act, as well as the 14th and 15th Constitutional Amendments, promising African-Americans citizenship and voting rights, and the 1867 Tenure of Office Act, but Congress passed them over Johnson’s veto.

Matters came to a head when Johnson tried to fire Secretary of War Edwin M. Stanton, who strongly opposed Johnson’s Reconstruction policies favoring the South.  The Tenure of Office Act mandated that a President could not dismiss a cabinet member without Senate approval. Violation of the act was the main impeachment charge in Johnson’s case.  Democrat Adam J. Glossbrenner, Congressman from the 15th Congressional District (York, Cumberland and Perry counties), voted against the House impeaching Johnson, but 126 congressmen voted “aye” to proceed, well over the simple majority of over half of 190 votes that was needed to proceed.  There were 47 “nays” and 17 representatives did not vote.  In 1868 there were 54 members of the Senate; 35 found Johnson “guilty” as charged and 19 voted “not guilty,” just one vote shy of the 36 needed for a two-thirds majority to convict Johnson.  He was therefore acquitted and finished serving his term.  Pennsylvania Senators were Democrat Charles R. Buckalew, who voted “not guilty,” and Republican Simon Cameron, voting “guilty.”

The Clinton case was entirely different, based on personal, not political actions.  In December 1998, the House of Representatives impeached Clinton on charges of perjury and obstruction of justice.  This stemmed from denying, under oath, his affair with a young White House intern and instructing others to help him in the cover up.  One rationale was that lying could harm the country by eroding the trust in the presidency.  (A commentator in a recent Time magazine article found that, just 20 years later, the case is rather “like a relic of a different time,” considering the “countless scandals” that have occurred since then.) In February 1999 the Senate acquitted Clinton of both articles of impeachment, falling short of the 2/3 majority needed of the 100 senators. The perjury charge was defeated with 55 “not guilty” votes and 45 “guilty” votes. The Senate split 50-50 on the obstruction-of-justice accusation.  Democratic Pennsylvania Senator Arlen Spector voted “not guilty” on both charges while Republican Pennsylvania Senator Rick Santorum voted “guilty” on both. Even though acquitted and allowed to finish his term, Clinton’s case had some consequences; his Arkansas law license was suspended and, facing disbarment by the U.S. Supreme Court, he resigned from that bar.

If a person holding Federal office is convicted by the Senate, besides being removed from office, the Senate can vote to disqualify them from holding a future federal office and rescind their pension or other benefits. They might even face criminal or civil charges. According to the House of Representatives website, from 1797 to present the House initiated impeachment proceedings more than 60 times, but less than a third have led to full impeachments. These include 15 federal judges, with eight of these judges convicted and removed from office by the Senate. Besides Presidents Johnson and Clinton, Secretary of War William Belknap was impeached in 1876.  William Blount of North Carolina was the only Senator impeached (1797).

Impeachment initiation and proceedings are rather complicated. I have tried to give you an idea here of what went on in the two presidential cases.  For more information, there are many excellent resources online concerning the impeachment process in general and on both trials.

Click this links for some of the resources I found online:

All impeachments, from the U.S. House of Representatives website.