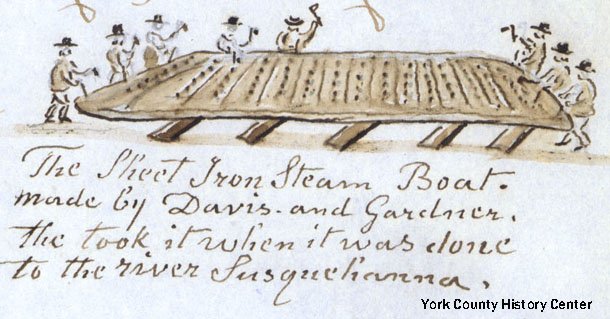 York countians had a hand in developing steam powered transportation

While doing some research on Phineas Davis and his York locomotive for an upcoming column, I realized I had never posted my column from some time ago on John Elgar and his Codorus steamboat. Elgar was a member of York’s Quaker community, as was Davis, and his iron steam boat was also fabricated at the Webb, Davis and Gartner shop on Newberry Street. The launch of the Codorus on the Susquehanna occured just six years before Davis’s successful anthracite coal burning steam engine powered the York to victory in the Baltimore & Ohio competition for a practical steam powered locomotive. The cylindrical boilers of both appear to be of similar design.Here is the Elgar column:

John Elgar is often referred to as an important person in York County history. Who was John Elgar and what did he do?

A state historical marker just west of Wrightsville on Route 462 reads: “America’s First Iron Steamboat. The ‘Codorus,’ built in York by John Elgar, was launched at present-day Accomac on the Susquehanna River, Nov. 22, 1825.”

York County native John Elgar joined his father’s nail-making shop in 1802 at age 18. But John was interested in making more than nails from iron.

In the 1820s interest turned to waterways for transportation. In 1823 the Pennsylvania legislature passed an act to improve the shallow, rocky Susquehanna River, probably by cutting deeper channels. Consequently, in 1825 a group of Baltimore and York businessmen, owners of flour mills at York Haven, formed a company to test the running of steamboats between York Haven and Northumberland.

John Elgar, working with the foundry and machine shop of Webb, Davis, and Gartner, came up with something new for America–a boat with a shell entirely of iron. Iron is extremely strong even when rolled thin, so it would be lighter than similar wooden vessels. It would, therefore, float higher in the water, avoiding the rocks and riffles of the shallow Susquehanna.

Elgar ordered the iron March 31, 1825 from Lukens in Coatesville, rolled and formed to exact specifications. Fabrication started in May, as folk artist Lewis Miller depicts, with the workers riveting the upside-down hull.

The shell was 60 feet long, nine feet wide, and three feet high. It weighed about 1,400 pounds. Deck, cabin, two side-paddle wheels, and other wooden parts added 2,600 pounds. The steam engine and the six-feet-high cylindrical boiler brought the total of the whole steamboat, unloaded, to only four tons. Draft would be about six inches, with an additional inch for each added ton, either people or cargo.

Both the Gazette and Recorder newspapers described the spectacle on November 14: More than 60 men with ropes pulled the Codorus from the shops west of the Codorus creek to east of the square. There it was loaded on two wagons lashed together for the journey to Keesy’s Ferry (Accomac) for launching a few days later.

At half pressure, this “work of art” steamed up the river, against the current and through the rapids, at an impressive six miles an hour.   She was “greeted by the firing of guns and with cheers” upon reaching York Haven. She left the next morning for Harrisburg, running a “serpentine” route, because of bars and shoals in the shallow river. At Harrisburg, Elgar was greeted by “hundreds, perhaps thousands of spectators.” Local dignitaries were treated to rides. The December 27 Gazette reports that by then, “most of the citizens of Harrisburg and the members of the Legislature have been on board of her.”

The Codorus wintered at York Haven, but on March 22, 1826 she steamed upstream toward the headwaters of the Susquehanna. Cheers, music and cannons erupted at Northumberland, Catawissa, Berwick, Bloomsburg, Wilkes-Barre, and Forty Fort. Elgar traveled the whole way up the north branch of the Susquehanna to Binghamton, New York and beyond, graciously accepting the hospitality of his hosts, even though he wrote to his niece that he would rather rest than be feted at banquets. At one stop he kindly treated 200 school children to a short ride.

The trip became so long that one of the editors of the Gazette, a stockholder in the Codorus, groused that Capt. Elgar might as well “sell the boat to some of those Yankees,” because he wasn’t accomplishing anything.

Even though the boat was praised for its beauty and novelty at every stop, it was beginning to become apparent that, without improvements, the Susquehanna was just not navigable most of the year. When Elgar returned back to York Haven the end of July, he admitted as much.

That was not the end of the Codorus. It stayed tied up in York Haven for nearly two years, then was taken to Baltimore in 1828 and sold. After a few months, it was sold again to Mr. Swan from North Carolina. In February 1829 the North Carolina Sentinel advertised for passengers and freight onboard the steamboat Codorus between New Bern and Beaufort. The route wasn’t as successful as was hoped, and a year later the Codorus was again advertised for sale.

The trail ends there. Some historians speculate that perhaps the hull found new use as a barge and the engine may have powered a mill. In any event, the little iron steamboat named for the creek near its birthplace can certainly be called the forerunner of the thousands of American-made ships of iron and steel that followed.

Fellow blogger Stephen H. Smith has also researched Elgar and his work.  Here are his posts:

York-built Codorus as a passenger ferry in 1829