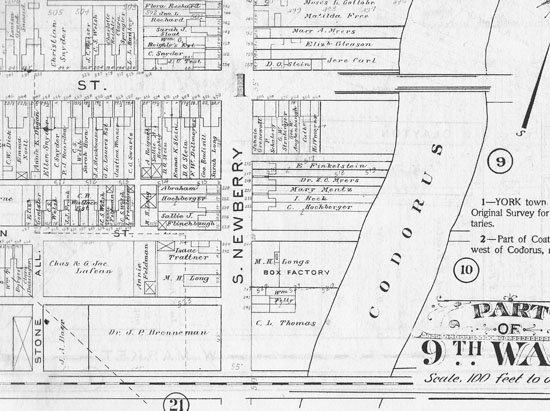 York officials were getting a bit testy with the condition of York bridges, according to the May 15, 1908 York Gazette. The streets were the responsibility of the city, but maintaining the bridges over the Codorus Creek was the county’s obligation.

The newspaper reports the following discussion:

“Mr. Caumer then reported that the Princess Street bridge over the Codorus is in bad shape. He said the west side abutment is dangerous and any person may fall over it; that the logs in the centre forming the divisions are loose and may cause damage.

Chairman Brenner said he was tired of going to the county commissioners.

Mr. Chalfant took occasion to refer to the condition of the College Avenue bridge, which has for a long time been closed to travel, to the detriment of every person who has occasion to cross the creek in that section. Whether going to a fire, hurrying after a doctor, or anything else, persons must go around by the other bridges if they want to get from one side of the creek to the other. He advised the roping off of the Princess Street bridge, if its condition warrants it, for to his mind, a few roped off bridges might make the commissioners wake up to their duty.

The map above is from Frederick Roe’s 1903 Atlas of the City of York. I am puzzled because the map shows street railway (trolley) tracks crossing the Codorus on College Avenue. Perhaps trolleys could use the bridge, but it may not have been safe to pedestrians, wagons and carriages.