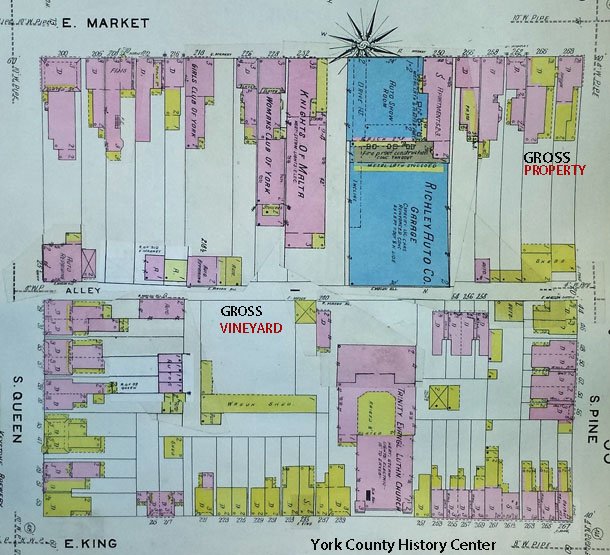 A vineyard in the heart of the City of York? Less than three blocks from the square? During Prohibition? Who would have thought it? See below for my recent York Sunday News column on John K. Gross and his prize-winning grapes:

J.K. Gross and his vineyard in the city

We might think of vineyards as fairly recent in York County, but they were common here over the years. An article, in the April 26, 1928 York Dispatch, tells of a noted vineyard right in the heart of the city.

The account states that 84-year-old John K. Gross, 266 East Market Street, had been growing grapes on Mason Avenue for 40 years, but now, he was giving up the venture and sending his vines to his son, John M. Gross, in Northampton County. The 200 stalks of more than 125 varieties would be planted on the 300 acre farm of the younger Gross, an official with Bethlehem Steel, under the direction of experts from Pennsylvania State College. John K. Gross was known for his grafting and his York plot was considered one of the leading vineyards in the country, according to the article. Note that Gross was practicing his grape-growing hobby, and transferring the vines to his son, during the heart of Prohibition, which lasted from January 1920 through 1933. They could, therefore, be only used legally as table grapes or to make non-alcoholic grape juice. It would be interesting to see what his son did with the transplanted vineyard once prohibition was repealed.

A later (1937) Gazette and Daily article on the York Fair said that the grape display was good that year for the first time since the late John K. Gross stopped entering his grapes. It said that “Mr. Gross, when he was an exhibitor, had a large vineyard on Mason Avenue, in the rear of his home on East Market Street.” That location piqued my curiosity since I am very familiar with that block, having been employed at the York County History Center a few doors down the street from the Gross home for many years, but I could not imagine where a vineyard would have fit.

The 1903 Roe Atlas of the City of York provided an answer. Annie M. Gross (John K.’s wife) is listed in the atlas as the owner of the property at 266 East Market Street, as well as adjacent 268. J.K. Gross’s name, however, is on a large lot on Mason Avenue about a half block away. Since the rest of the immediate area in the atlas is filled with buildings, that lot is almost certainly the vineyard site. It is now the parking lot with a low cement wall on Mason just west of the former Trinity United Methodist Church and behind the Baker building, Woman’s Club of York and former Visiting Nurse headquarters, (now Keystone Auctions). The Baker building is presently being converted into apartments; as far as I know the lot will be parking for the apartments. A check of Sanborn maps at YCHC indicates that the site has been used solely for parking for many years, perhaps from soon after Gross gave up grape growing.

Searching for information on the Grosses, including taking advantage of the York County History Center’s subscription to newspapers.com, turned up interesting tidbits on the family. John K. Gross was the Freight Agent for the Pennsylvania and Northern Central railroads at York. A brother, Edward Z. Gross, had been Mayor of Harrisburg. Daughter Janet was the wife of Pullman automobile manufacturer Albert P. Broomell. Son John M. married Mary Robinson Boykin, a Baltimore socialite who was related to the wife of Theodore Roosevelt, Jr. Wife Anne’s father, retired Reformed Church pastor Reverend Doctor J.F. Messick, spent his last years with John K. and Anne, attaining the age of 102.

John K. Gross himself had made headlines in the York and Harrisburg papers 40 years before, surviving a rather spectacular accident. The report in the York Daily of December 1, 1888 reads:

Yesterday morning about eight o’clock Mr. John K. Gross, general freight agent of the Pennsylvania and Northern Central railroads went to McClellan & Gotwalt’s store, 19 East Market Street, for the purpose of purchasing some cartridges for his revolver. Mr. A.C. Fulton, clerk in the establishment, waited upon him in the front part of the store on the east side, where firearms and ammunition are kept. Mr. Fulton had laid out some cartridges, and Mr. Gross moved around behind the counter to try some of the cartridges in the chamber of his revolver; and while in the act, and while the clerk’s back was turned, an explosion occurred which almost knocked both men down, painfully burning Mr. Gross, and knocked out the large plate glass in the show windows, besides shattering other glass, and scattering goods about promiscuously. Mr. Gross’s head and neck were blackened and his hair, eyebrows, eyelashes and mustache singed and both hands were badly burned. His eyes were not seriously injured.

Mr. Fulton escaped injury, as did also Mrs. K. Williams, of Goldsboro, who was covered by flying glass as she came in the door at the time of the explosion. A couple of persons passing on the outside at the time were struck by flying glass but not seriously injured.

It is supposed the explosion was caused by the revolver going off, the ball entering a can of powder which was near Mr. Gross at the time, thus exploding it. The can contained probably a little over two pounds of powder. The damage will be over $500. There is an insurance of $320 on the plate glass destroyed. Altogether it was a narrow escape from death and great damage.”

A similar account in the York Dispatch, picked up by the Harrisburg Telegraph, adds the information that Gross was able to walk across the street to the office of Dr. Ahl, where his burns were treated before he was driven home. (One hopes that better safety precautions with live ammunition and gun powder are practiced today.)