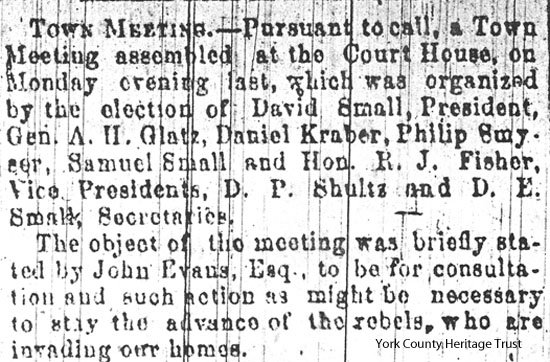 York town fathers are getting the picture–the Rebels are coming–soon. So it is time to make some plans, as reported below in the June 23, 1863 issue of the weekly York Gazette:

The object of the meeting was briefly stated by John Evans, Esq., to be for consultation and such action as might be necessary to stay the advance of the rebels, who are invading our homes.

E.H. Weiser, Esq. was called for, who responded in a few remarks. W.W. Reed then addressed the meeting.

D.E. Small offered the following resolution, and urged the importance of action, setting forth the fearful consequences of a rebel invasion.
Resolved. That a Committee of Safety, composed of fifteen citizens be appointed, who shall have power to make any arrangements that they may think proper for the protection of our town, county, and state.

The resolution was adopted and the Committee appointed, as follows:

Dispatches from Harrisburg were read by Henry Welsh, Esq., stating the progress of the rebels and urging action.

On motion of C. A. Morris, a roll was immediately prepared for the reception of the names of such persons as were disposed to volunteer, pending which motion Mr. Thomas White offered a few practical suggestions.–The motion was agreed to, and a number of men present signed the roll.

John Evans, Esq. offered the following resolution, which was adopted.
Resolved, That the Committee just appointed is empowered to increase its number by adding not exceeding two members from each Ward, to enable it to place sub-committees in each Ward for the purpose of raising and organizing companies. Adjourned.

The committee appointed at the meeting issued a call in obedience to the Governor’s Proclamation, for the formation of military companies to be sent to Harrisburg for the defence of the State.

On Wednesday morning, the Committee waited upon the Commissioners of the county and requested them to appropriate a sum sufficient to pay a bounty of twenty-five dollars to each volunteer. The commissioners, however, declined to do so upon the request of a committee of citizens of the borough alone, and desired an express of the sentiment of the county. This could not be had in time to be of any service. The Committee of Safety, therefore, called a Borough meeting at six o’clock, on Wednesday evening, to which they made report of their action and asked that the Town Council of the Borough appropriate five thousand dollars for bounties. The meeting unanimously and enthusiastically passed a resolution recommending the Town Council to make the appropriations required. And also passed a resolution requesting the County Commissioners to appropriate twenty thousand dollars for the same purpose.

The Town Council met at a late hour on Wednesday night and unanimously voted to appropriate $5,000 for bounties to soldiers.

We understand that the committee of safety were in consultation with Gen. Franklin and Major Haller, who are placed in command of the military preparations here by order of Gen. Couch. We may therefore, rest assured that every thing that can be done will be done to effectively protect the Borough and county. Organizations will immediately be formed for home protections and active operation begun, for the throwing of obstructions in the way of the enemy in case raids are attempted in this neighborhood.