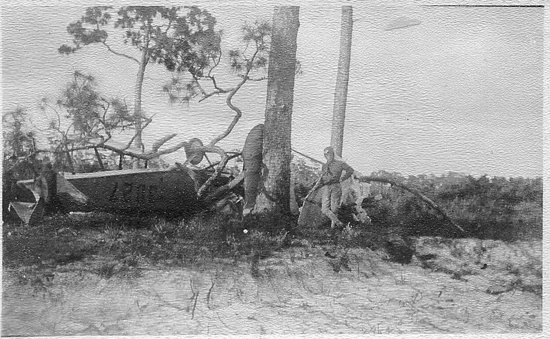 Jason B. Snyder headed the York YMCA for many years. Many people who remember him as a pillar of the community are probably not aware of his Florida adventure during World War I. His family recently shared a clipping from the Saturday, June 22, 1918 Fort Myers Press as well as photographs. They pretty well explain why Snyder did not become an aviator.

Here is my recent York Sunday News column on the incident:

World War I air cadet from York runs into a problem

This year we commemorate the 100th anniversary of World War I (1914-1918). This would be the first conflict in which the military would take to the air in planes. Carlstrom Field, southwest of Arcadia, Florida, was one of many fields built or modified in Florida to train pilots for World War I and World War II.

One of these pioneering flight cadets was Jason B. Snyder from York County, born in Loganville in 1894. Training apparently went well for the young pilot trainee, until near the end. The story of his “very narrow escape, taken from the June 22, 1918 Fort Myers Press is below:

“Plane Caught in Tree Top near Naples
Cadet Snyder Loses Course and Makes Successful Landing at Naples.
In Attempt to Rise from the Golf Course, is Carried into Pine Tree Top

Cadet Snyder of Carlstrom Field, while making his last cross country flight this morning, before receiving his commission as Lieutenant, had a very narrow escape from being crushed in his machine, and it is the plane he was driving that was badly wrecked, and is hanging in the top of a tall pine on the Naples Golf Course

Several flyers started from Carlstrom Field this morning for Moore Haven, among them Cadet Snyder, who in some unaccountable way became separated from the rest of the party, and followed the grade to Naples, and succeeded in making a beautiful landing on the grounds of Naples Golf Course.

After replenishing with gas at about 11:00 this forenoon, he began the ascent, and in doing so, just missed one tall pine only to come in contact with another 30 or 40 feet from the ground. The wings of his machine were badly wrecked, and the plane itself has been hanging in the top of the tree. The fact that Mr. Snyder was flying alone and in the rear seat perhaps accounts for his getting off without a single injury.

At the time of the accident Mrs. J. E. Foxworthy and her family, who have been passing several weeks at Naples, were out on the Gulf, fishing, and were able to distinctly observe the whole affair. That Mr. Snyder had escaped with his life was more than they thought could be possible, so that when Mrs. Foxworthy was asked to bring the young man into Fort Myers, she acquiesced with mingled feelings of sympathy and terror. Her astonishment a little later was great when she saw Cadet Snyder climb out of the machine and let himself to the ground by means of limbs of the tree.

Mrs. Foxworthy drove the young aviator into the city between one and two o’clock and he immediately wired to headquarters at Carlstrom Field for orders, an hour later returning to Naples in Mrs. Foxworthy’s car. His greatest anxiety now is in regards to the Lieutenant’s commission he expected to receive next week, and to whether or not the accident will have a deterrent effect upon it being issued.”

According to his family, Snyder spent the rest of his army career behind a desk, not in the cockpit of an airplane. Armistice was declared less than five months later, on November 11, 1918, and Snyder spent about a year altogether in the service.

He returned home to the York YMCA, where he had been employed since 1916. He directed membership and educational programs there until 1924 when he became Associate Secretary, and then General Secretary [Director] in 1932. He led the Y until he passed away at age 63 in 1957, having overseen a major move from 124 West Market Street to today’s site at Newberry and Philadelphia Streets, and also the 100th anniversary celebration of the Y.M.C.A. in York in 1955.

Some of the Florida airfields continued as bases after the end of World War II, some became commercial airfields and some were abandoned, built over or faded into the Florida landscape. Information on these and other small fields all over the country can be found at www.airfields-freeman.com. An interesting location that I have visited was the site of Buckingham Field east of Ft. Myers. You cannot enter the private airport there, but the adjacent housing development, called Buckingham Air Park, is quite unusual. Each house has an attached hanger, just like a suburban garage, and the stop signs are just a few feet off the ground to fit under wings. The welcome sign warns that “motor vehicles must yield to taxiing aircraft.”

On a personal note, when I was first married many years ago, my husband was a Marine Corps radar operator at Marine Corps Air Station northwest of Miami. According to an internet search, that site has had an interesting history since then, including serving the CIA for Cuban operations; it is now Opa Locka Executive Airport, accommodating “corporate flights and training exercises.”

I remember my husband coming home one evening and telling me about extremely fast blips moving across the radar screens that day. Jets from the base were scrambled, but nothing could be found. We later realized we were in the “Bermuda Triangle.”

The former Carlstrom Field, which had a distinctive circular layout, can easily be seen on maps and satellite views today. It is on Florida route 31 southeast of Arcadia and northeast of Fort Myers. The field was closed in the early 1920s, but it was reopened for pilot training during World War II. According to internet sources, after 1945 it was converted to a mental health facility, the G. Pierce Wood Memorial Hospital. Around 2002, the hospital closed and the site is now the DeSoto County Juvenile Correctional Complex. 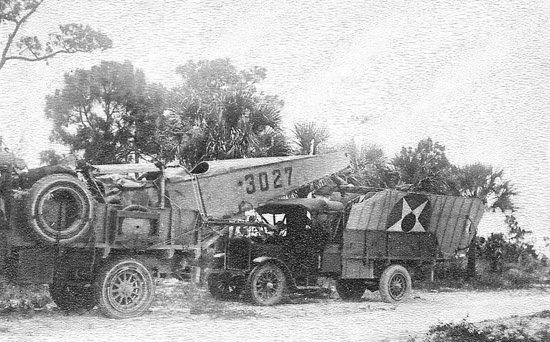