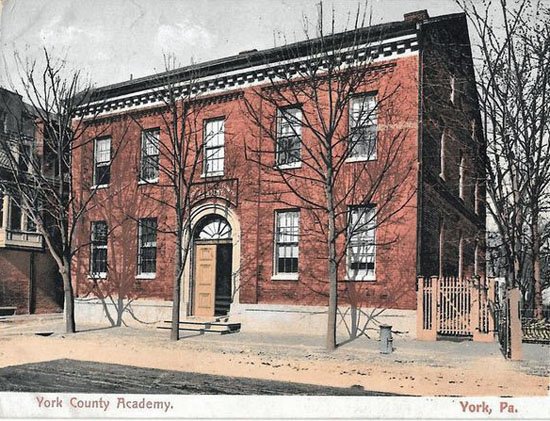 Remember the pressure of final exams? Putting pencil to paper doesn’t seem so bad when compared to oral exams conducted in public and advertised in the newspaper, as seen by the clipping below from an early York paper:

York. April 22, 1789
There will be a public examination of the Schools of York Academy on Saturday & Monday, the 25th & 27th inst. The exercises to begin on each day, at 9 o’clock forenoon.
On the evening of Monday, the Pupils of the Academy will perform the celebrated tragedy of Cato, to which will be added the pleasing entertainment of the Mock-Doctor. The airs, set to music by Mr. Dyche, who will also perform on the violin betwixt the acts, accompanied by young gentlemen of the Town on German flutes.
Tickets—at one quarter Dollar each to be had at Mr. Spangler’s, Mr. Upp’s, Captain Stake’s, Capt. Johnson’s & at the door of the Academy which will be opened on each evening at 5 o’clock.
Once the exams were over, the public could also gain admission, for the equivalent $6.50 today, to plays and musical performances by the students. Cato: A Tragedy written by Joseph Addison in 1713, with its ideas of standing up for liberty, was very popular during the eighteenth. On a lighter note, Mock Doctor or The Dumb Lady Cur’d was a 1732 play by Henry Fielding, adapted from Moliere).

From Gibson’s 1886 History of York County entry on the York County Academy:
“The following minute occurs, October 21, 1801, at the close of a public examination of the school: ‘The pupils exhibited evidence of great improvement, and the teachers, as well as the pupils, have obtained the approbation of the board.’ Examinations were held, first quarterly, then semi-annually, and afterward were continued annually.”