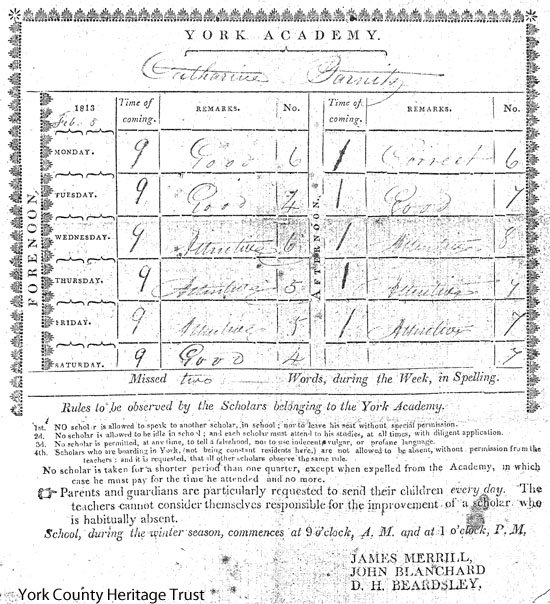 I came across a weekly report card at York County Heritage Trust for Catharine Barnitz, a student at York Academy. It was dated February 5, 1813. Catharine was punctual, as her “Time of coming” each morning was nine, and time of coming each afternoon was one. There are blanks for each day of the week, Monday through Saturday. Only Saturday morning is filled in, so I am assuming that school was in session for only half a day on Saturdays.

Catharine was also marked, both morning and afternoon, on deportment. In that week she earned six attentives, four goods and one correct. There is also a column of numbers, but no explanation as to their meaning; Catharine had two fours, two fives, three sixes, four sevens and one eight. She only missed two spelling words during the week.

Rules were very clearly outlined below the report:

“Rules to be observed by the Scholars belonging to the York Academy.
1st NO scholar is allowed to speak to another scholar, in school; nor to leave his seat with special permission.
2d No scholar is allowed to be idle in school; and each scholar must attend to his studies, at all times, with diligent application.
3d No scholar is permitted, at any time, to tell a falsehood, nor to use indecent, vulgar, or profane language.
4th Scholars who are boarding in York, (not being constant residents here.) are not allowed to be absent, without permission from the teachers; and it is requested, that all other scholars observe the same rule.
No scholar is taken for a shorter period than one quarter, except when expelled from the Academy, in which case he must pay for the time he attended and no more.

 Parents and guardians are particularly requested to send their children every day. The teachers cannot consider themselves responsible for the improvement of a scholar who is habitually absent.

When you think about it, the rules above are still what we expect from the school children. Maybe things haven’t changed so much after all.