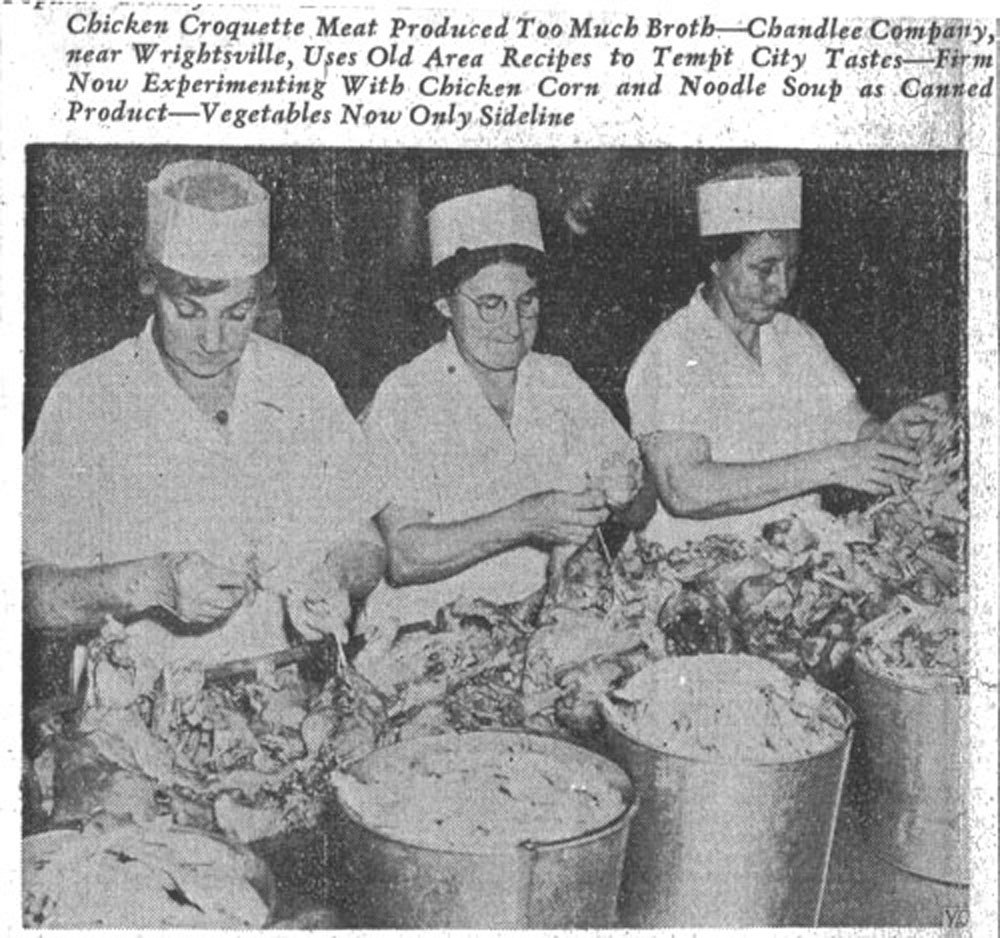 Early commercial canners started out preserving vegetables. As techniques improved, it was inevitable that the heating and sealing process would be used for other foods.
The photo above, from the November 13, 1950 York Dispatch, shows three women, Mrs. Lillie Greenawalt, Mrs. Reed Monroe and Mrs. Grace Wallace, picking buckets of chicken meat off the bones. The Chandlee canning company, near Wrightsville, was turning the chicken, broth, potatoes and hand-rolled squares of potpie dough into its Meeting House brand of canned potpie. Its initial slogan was “Truly a Dutch Treat.”

Owner T. W. Chandlee grew up in the canning business. His father Ira Chandlee was a long-time owner of the Brogue canning house, one of the many canneries spread around York County. After serving in World War II, T. W. opened his own vegetable canning house on a farm that had previously been part of the Lauxmont estate. Looking for something to process during the off season, he consulted Kenneth Fertig of Baltimore, who suggested packing chicken meat for chicken croquettes. Marketing for the canned chicken included a label with a bonneted woman and flat-hatted man and “Chicken croquettes is goot!”
It was only a short step from there to the idea of canning a real Pennsylvania Dutch dish–chicken potpie, as a solution to what to do with all the leftover chicken broth produced while cooking the croquette meat. They worked out a process with layers of chicken, sliced potatoes and potpie dough. They filled the can with chicken broth and then capped, processed and labeled the cans.
At the time of the article, a year after starting to can croquette chicken and soon after inaugurating the potpie, Chandlee employed about 20 people and was using a ton of chicken a day. He was also looking into starting a line of chicken soup to use up even more broth.
He did admit to one concession to marketing to a wider audience: The labels read chicken and dumplings instead of chicken potpie, so “foreigners” (people outside of Pennsylvania Dutch country) wouldn’t be confused.
I don’t know what happened to Chandlee’s venture. If you do, please let me know.
The only other canned potpie I know of was made by Aunt Kitty’s. They are now part of Hanover Foods, and I don’t know if they still can potpie or not. Guess I’ll have to look around the grocery stores.
Click here for more on York County canneries.