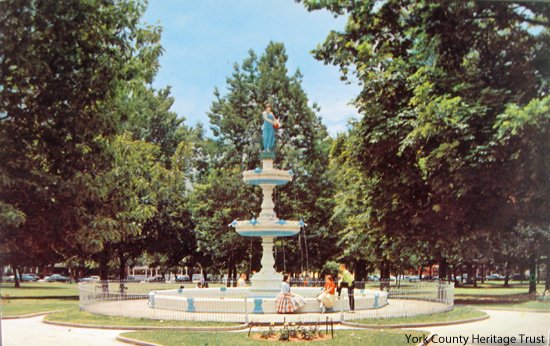 Here are two more postcards from the York County Heritage Trust Library/Archives of Penn Park’s Rebecca at the Well fountain. They bring images of this impressive monument closer to the time when the fountain was taken down in 1968.

The view above might be from the late 1950s, judging by the students attire. It is a glossy Plastichrome card and describes the scene as:

“PENN COMMON
This colorful, all metal fountain, located in the
middle of a 16 acre park just four squares from
the center of town, has held the interest of young and
old for over fifty years. A lasting reminder of the
civic pride and responsibilities expressed by City
Councilmen Smyser and Van Baman.”

The “over fifty years” fits in with the fountain’s erection in 1898 also. Whoever supplied the information for the caption didn’t include A. B. Farquhar as one of the people responsible for the fountain, as contemporary reports show he was. Since Farquhar has another city park named after him, perhaps in the 1950s his name wasn’t associated with development of Penn Park in the 1890.

The card below is a linen textured type. It was sent to Ohio from York in 1954, but it may have been produced from a photo a decade of so earlier, judging by the size of the trees. Rebecca’s dress and jug do seem to be painted in color here, but more subdued than on the Plastichrome card. Friends have told me that she was decorated in color for the last several decades that she stood, and that the colors did change with new coats of paint. 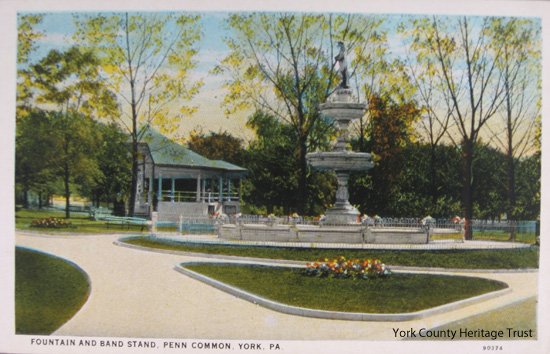 Will the Rebecca fountain ever rise again? Wouldn’t that be nice? In other areas municipalities, organizations and private citizens have beautifully restored these cast iron fountains made by Smyser-Royer’s Variety Iron Works for the J. W. Fiske Company. Just about all, although impressive, are smaller and/or less ornate than the Penn Park fountain. An internet search turns up many results, including this January 2012 Shippensburg Sentinal article on the current restoration of one at Shippensburg University.