Where is James Smith’s original gravestone? 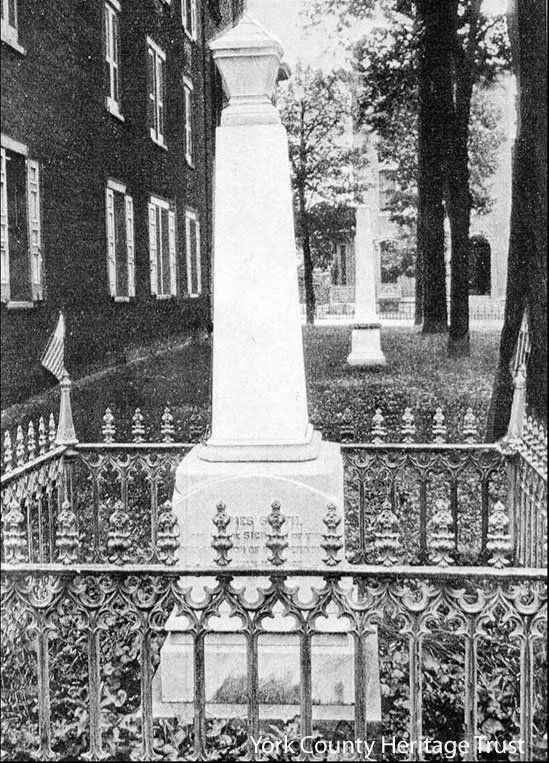 Does anyone know what happened to the original tombstone of James Smith, York’s Signer of the Declaration of Independence? Not the fancy one shown above, which was put up in 1850. It replaced an earlier stone, which was last seen in 1887 in the basement of a house in the first block of South George Street. Two generations of the James Smith family owned and lived on most, if not all, the lots on the west side of George Street from Mason Avenue to King Street.

First Presbyterian Church of York, the congregation to which James Smith belonged and in whose churchyard he is buried, is celebrating its 250th anniversary this year. This has led to much interest in the church and its members over the years. As the anniversary committee is literally leaving no stone unturned, they would love to know the whereabouts of the first gravestone. If you have a clue, please contact me through the comment section below or email me at ycpa89@msn.com.

“While the workmen were making excavations in the cellar of the old Chapman property on South George Street, purchased by Dr. Jas. A Dale, who is having the place remodeled and improved for a new store room, a large marble tablet, such as is used as flat tombstones, was unearthed. Upon it was the following inscription:
‘In perpetum Dei Memoriam. Departed this life July 11, 1806. James Smith, Esq., at the advance age of 93 years. An early, warm and active friend in defence of the Liberties of his country.
This is therefore erected to show the feelings the worth attracted by his afflicted relatives and friends. In life esteemed; in death lamented. The Lord giveth and the Lord taketh away. Blessed be the name of the Lord.’
It is not known how the tablet got there.”

I haven’t checked deeds or census yet, but perhaps someone connected with the family still lived in the house when the new one, which also includes data for Smith’s wife Eleanor and his daughter and son-in-law, Margaret and James Johnson, was commissioned. Probably no one knew quite what to do with the old one, so they did what we tend to do–put it in the cellar.

Have you seen it?