Where did all the downtown York shoppers go? 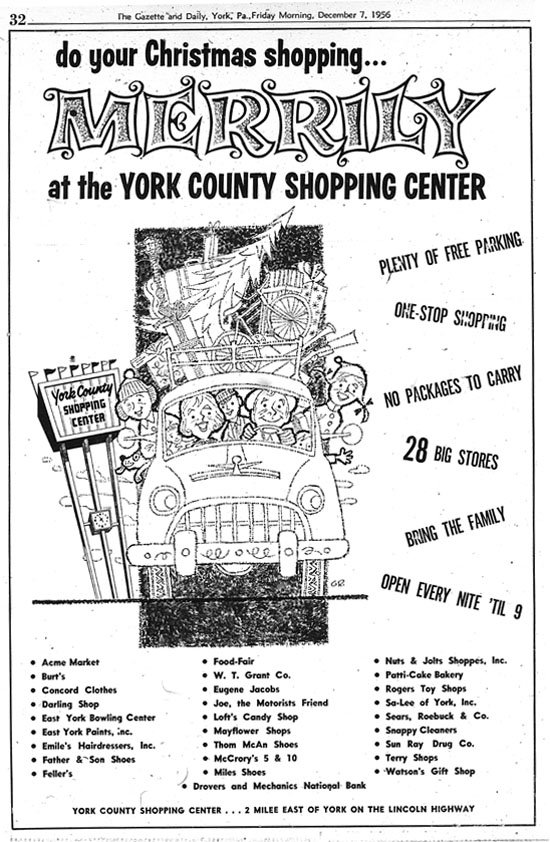 It was Christmas season 1956, and the battle lines were drawn between downtown and suburban shopping centers. The first stores in the York County Shopping Center in Springettsbury Township probably opened in the fall of 1955, since the center celebrated their second anniversary in October 1957 by giving away a Renault Dauphine automobile. (The center is now named York Marketplace, but I don’t know anyone who calls it that. Google maps is even confused, trying to put York Central Market in front of the York County Shopping Center.)

By December 1956 the shopping center was in full swing with 28 stores and other businesses. They pushed their advantages, as seen in this full page ad in the December 7, 1956 Gazette and Daily. Free parking was stressed, as was having 28 stores clustered together, as well as their being open every night until nine.

How many of the stores do you remember? I recall Feller’s clothing store because my mother worked there about ten years later. I also remember some of the larger stores, like Food Fair, McCrory’s and Sears. Eugene Jacobs was menswear and the Darling Shop might have been women’s clothing. I have no idea what some of the others were, especially if they don’t have clues like shoes, toys or gifts in their names. Burt’s? Sa-Lee of York, Inc.? I’ll have to check the city directories at York County Heritage Trust unless someone can help me out.

Here’s an link to Jim McClure’s Yorktown Square blog post with a 1958 aerial view of the shopping center to help jog your memory.

In my next post, I’ll show you a couple ways the York downtown merchants were trying at the same time to lure customers to their stores.

For easier reading, the stores listed in the ad above are transcribed below:

These stores are all gone from the shopping center, with a relative few still in business at different sites. Other businesses have replaced them, and have been in turn replaced. With the ease of electronic shopping, are bricks and mortar stores soon going to obsolete? All we know is that change is inevitable.