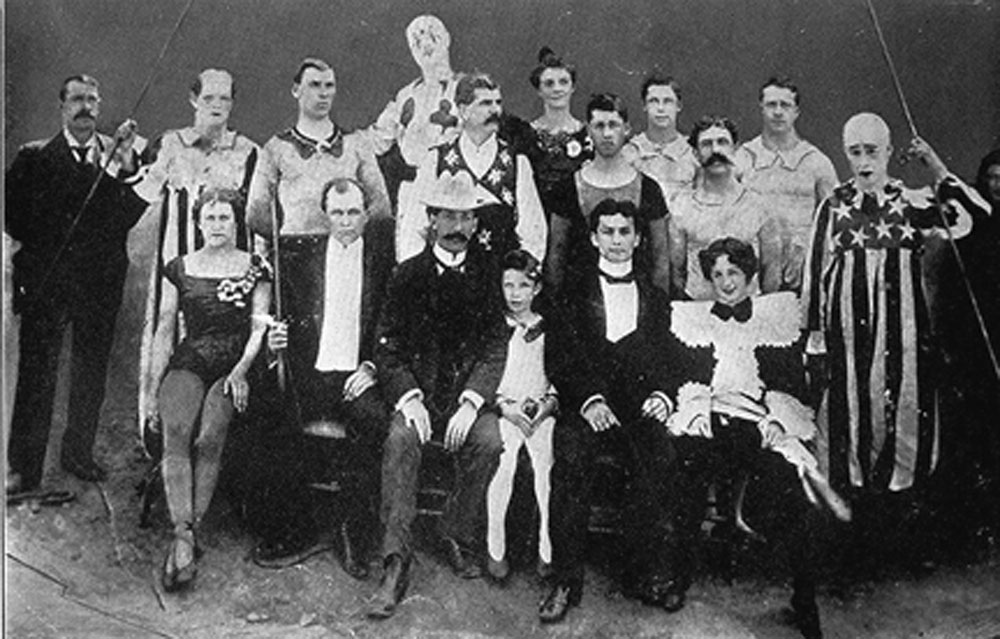 Harry and Bess Houdini are on the right in the front row of this photo of Welsh Circus performers. (Courtesy of the Library of Congress}
Posted by June LloydJanuary 25, 2019January 25, 2019 1890s, circus, entertainment, Uncategorized, Universal York, York County

When Houdini came to town.

Harry Houdini (Ehrich Weiss) and his wife Bess (Wilhelmina Beatrice Rahner) were young circus performers in 1898.  They came to York County with the Welsh Brothers circus in September of that year.   The show set up at Poplar and Edgar Streets with two performances each day for several days.

The York Gazette agreed with the Welshes, from Lancaster,  who claimed that they put on “the best ten cent show on earth.”  A Thursday afternoon performance was sparsely attended.  Many people were at work and school then. That evening, however, was a sellout, with many turned away.

The paper claimed that Welsh Brothers had most of the acts of a larger circus.  The list includes Japanese acrobats, mid-air performers, triple bar experts, an Arabian juggler, trapeze artists, a Shakespearian clown, talking and signing clowns and a top-notch band. Harry and Bess are listed at that point in their careers as “novelty artists.”  A blog on magicians says the Houdinis each performed several different acts for each performance in those early years.

The Houdinis travelled with the Welsh Brothers in 1895 and 1898.  The Welsh circus, including the Houdinis,  probably had already played York in 1895. The writer of a different Houdini blog post thinks the photo above was taken during the 1898 tour.  The place in which it was taken is not identified.

Just another instance of the long list of famous people who have come to York County at one time or another.