What young ladies learned in York in the 1820s 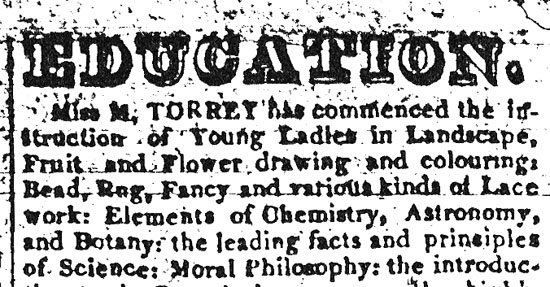 The advertisement transcribed below, from the September 29, 1829 York Recorder, gives us an idea of some of the things young ladies in York County had the opportunity to study, if they were so inclined,and their parents were willing to pay the instructor.

It also sent me to Google to see who Bolman and Pestalozzi were. I struck out on Bolman, but Johann Heinrich Pestalozzi (Swiss, 1746-1827) is sometimes called one of the fathers of modern education. He advocated teaching children to think instead of by using rote memorization, and he also championed training of teachers.

“EDUCATION.
Miss M. Torrey has commenced the instruction of Young Ladies in Landscape, Fruit and Flower drawing and colouring; Bead, Rug, Fancy and various kinds of Lace work; Elements of Chemistry, Astronomy, and Botany; the leading facts and principles of Science; Moral Philosophy; the introduction to the French language, on the highly esteemed plan of Bolman; and the introduction to the English language, in the Pestalozzian method—at the residence of Mr. GARDNER, two doors east of the Globe Inn.
Parents and young ladies are invited to call and view specimens of new and valuable improvements in the art of drawing and colouring, by which the pupils are enabled, in a very short time, to give to their drawings that peculiar softness and delicacy which is seldom attained in the usual method of colouring, until after long and careful practice.
For the convenience of those who may be attending other schools at the same period, lessons will be given at any hour in the day.
Terms very moderate.
Sept 3.”

Miss Torrey’s educational options are varied. The emphasis seems to be on art, but perhaps Miss Torrey thought she could at least get established by instructing the girls in art after they had finished their studies for the day at another school.

Just a few years earlier, Miss Heche was eager to teach French and dancing to Yorkers.