The drawings of York folk artist Lewis Miller are often used to illustrate 19th century American life. An example is the illustration above of a dog stealing Mrs. Weiser’s sausage out of the pan. It shows the three-legged frying pan set over the coals on the hearth, the right height for the dog to snatch the meat without getting too close to the fire. The kitchen could have been in a separate small building, as they often were as a fire precaution and to keep the main house or tavern cooler in the summer, giving the hound time to snatch the sausage.

Catharine and Martin Weiser kept a tavern into the early 19th century in York. Martin was born in Berks County and seems to have been a grandson or a great-nephew of the noted interpreter and treaty maker with the Native Americans, John Conrad Weiser. Several of Weisers came to York County. The Samuel Weiser below, who was renting out perhaps a different tavern space in 1816, could be a brother or grandson of Martin. As anyone researching Pennsylvania Germans quickly realizes, our forebears didn’t choose from a large pool of given names. Both Martin and Samuel Weiser are portrayed in Lewis Miller’s People recently published by York County Heritage Trustm<> (see below).

Miller’s caption for the drawing reads:

“Mrs. Cath’e Weiser, frying a Sausage, and a hound came and Stole it out of the pan for his Breakfast. The dog devoured with much greediness while Mrs. Weiser was out for a dish & fork to Serve it on the table. Teach a dog and put him in a way to fulfill its demands and you make him a moral Agent.
Woman Guard Your Kitchen”

Miller seems to be saying that the sausage theft was the fault of Mrs. Weiser, not of the hound.

In late winter 1816 Samuel Weiser advertised in the York Gazette: 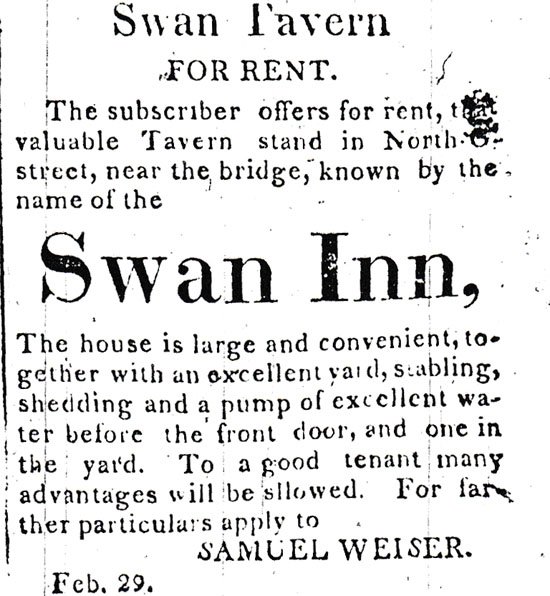 “Swan Tavern
FOR RENT
The subscriber offers for rent, that valuable Tavern stand in North G[eorge]
street, near the bridge, known by the name of the
Swan Inn,
The house is large and convenient together with an excellent yard, stabling, shedding and a pump of excellent water before the front door, and one in the yard. To a good tenant many advantages will be allowed. For farther particulars apply to
SAMUEL WEISER
Feb 29″ 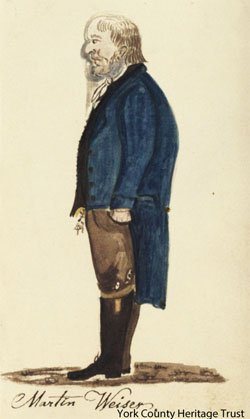 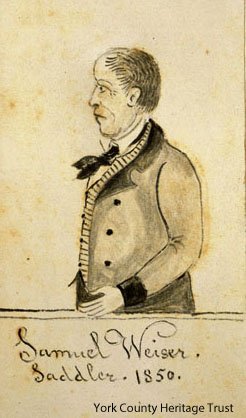