Was there vinegar at Vinegar Ferry? 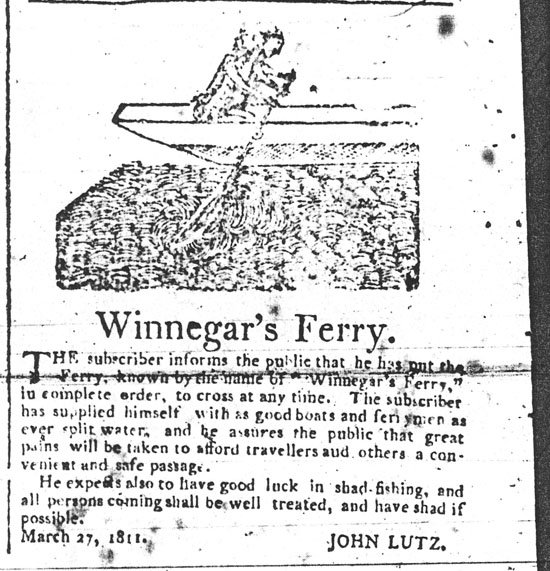 I’m deeply into ferries–the subject of my upcoming York Sunday News column. Did you know there were at least 15 ferries crossing the Susquehanna from the over 50 miles of York County shore, stretching from the Yellow Breeches Creek on the north to the Mason-Dixon Line on the south?

If you go up Route 441 above Marietta, you might have noticed Vinegar Ferry Road just north of the huge Armstrong plant. It crosses under the railroad tracks and ends at a park by the river. The road heads east to Maytown, where it changes names and connects with Mt. Joy and other towns. The eastern terminus of the Ferry would have been on River Road in Hellam Township, near Wildcat Lane.

Was a lot of distilled apple product hauled across the river there? No–Christian Winiker was one of the early operators, and that is how all those good Pennsylvania Dutch (German) folk would have pronounced the name.

I copied John Lutz’s 1811 ad above from the microfilms of the York Recorder at York County Heritage Trust. It reads:

Winnegar’s Ferry
The subscriber informs the public that he has put the Ferry, known by the name of “Winnegar’s Ferry,” in complete order, to cross at any time. The subscriber has supplied himself with as good boats and ferrymen as ever split water, and he assures the public that great pains will be taken to afford travelers and others a convenient and safe passage.
He expects also to have good luck in shad fishing and all persons coming shall be well treated, and have shad if possible.
March 27, 1811. JOHN LUTZ

Lutz may have just purchased the ferry or this ad might be to let people know that the river was clear of ice and the ferry open for the season. You could even take some nice fish along home for dinner.

The accompanying illustration is crude, but it does show the flat, shallow type of ferry boat that would have been paddled or poled across the river.