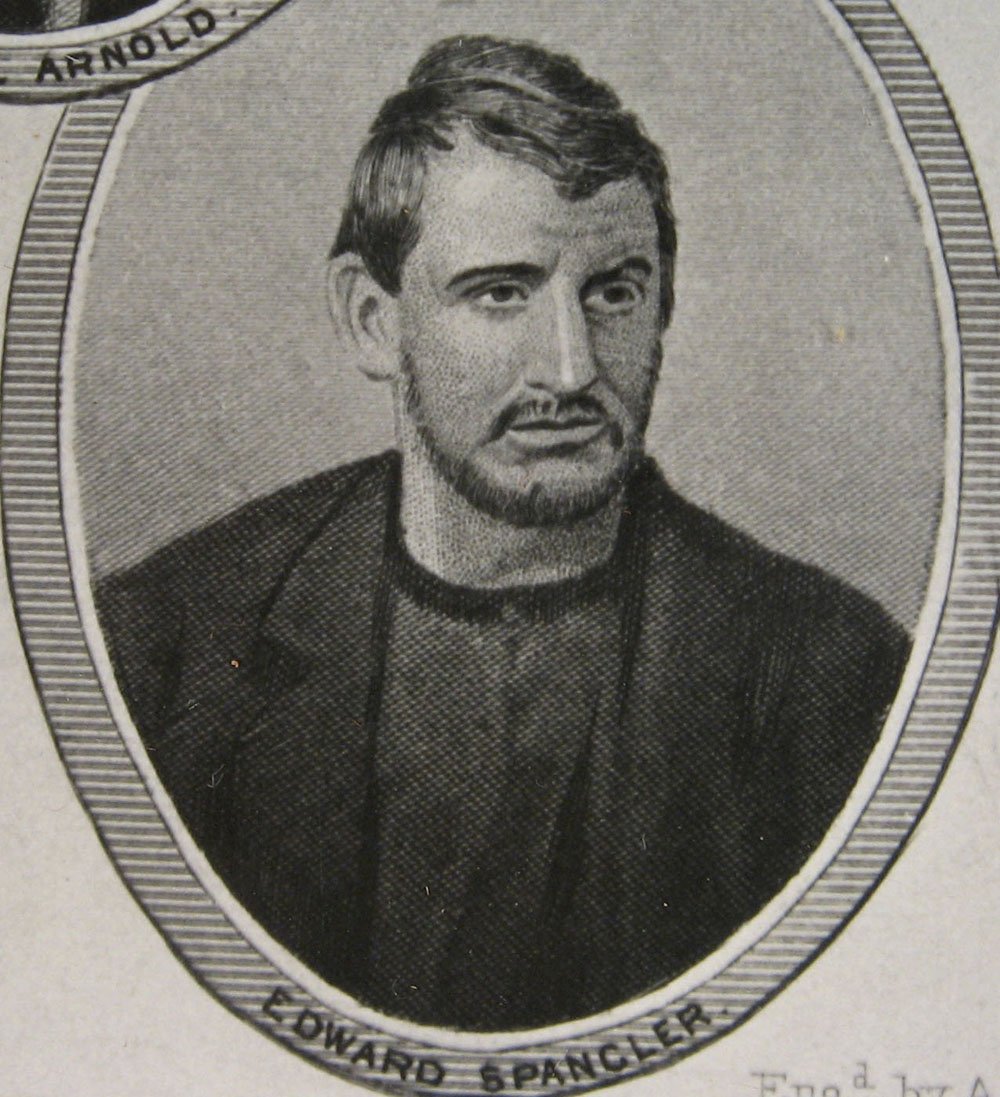 Was Edman “Ned” Spangler Guilty in the Lincoln Conspiracy?

Ned Spangler, taken from a larger set of depictions of the conspirators
Of what was Edman Spangler guilty? Tried together with seven others accused in the Lincoln Conspiracy, York native Edman “Ned” Spangler was not found guilty of conspiring to murder the president. The military commission found him guilty only of aiding and abetting John Wilkes Booth’s escape from Ford’s Theater.
Was he guilty even of that charge, or only guilty of having the charismatic Booth as a friend, a friendship that mostly benefited Booth, since Ned took care of Booth’s horses and did other errands for him?
Ned proclaimed his innocence from prison and kept proclaiming it all his life, even after he was set free via a presidential pardon. His later statements were carried by leading newspapers throughout the country and the sympathy of northerners as well as southerners seems to have been with him.
I’ve found a good bit of material on Ned Spangler in the files at York County Heritage Trust, in many books published on the conspiracy and also online, so I will be doing more posts on him. For an overview of Ned’s life, see my recent York Sunday News column below.

York’s Ned Spangler–tried as part of the Lincoln Conspiracy
“Ned” Spangler was born August 10, 1825 in York, Pa. Even though he is sometimes referred to him as Edmund, and trial transcripts name him Edward, he signed himself Edman Spangler, the name with which he was baptized at York’s First Reformed Church. Many people just called him Ned.
How did a simple carpenter, whose great grandfather was one of the founders of York and whose father had served as York County Sheriff, end up on trial before a military commission, accused of participating in perhaps the greatest conspiracy this country has ever known?
Ned could have known Lincoln assassin John Wilkes Booth when Booth attended the Sherwood School in York for a short time as a teenager in 1854. Ned himself said he knew Booth about that time, while working as a carpenter building on the Booth family’s new home at nearby Bel Air, Md. Starting around 1853 Spangler had worked at theaters in Baltimore and then at Ford’s Theater in Washington as a carpenter and a scene shifter, and would have been known at those venues.
Booth played at Ford’s Theater occasionally and also had a stable back of the theater for his horses. Ned and others who worked at Ford’s took care of Booth’s horses when he was out of town. Booth was such a familiar face at the theater that he had his Washington mail sent there. Ned himself slept in a room at the theater, taking his meals at a nearby boarding house.
On Friday April 14th, the night of Lincoln’s assassination, Booth had been around Ford’s theater. Part way through the play Booth called Ned out in the alley to hold his horse. Spangler was needed to shift the scenery on time, so he passed the horse-holding on to “Peanut John” Burroughs, a boy who did odd jobs around the theater.
The next few days were chaotic. Ned was taken in by the police, questioned and released a couple of times, then arrested Monday and taken to the Old Capitol Prison. By April 29, when the suspects were taken by boat to be securely imprisoned at the Old Washington Arsenal, most of them were chained, schackled and fitted with heavy hoods that had only a slit for breathing and eating. Ned was told the torturous hooding was ordered by order of Secretary of War Stanton.
The hoods were only taken off for the trial during the day. Major General Hartranft, in charge of the prison and prisoners, feared for their sanity, saying that Spangler’s mind was beginning to wander. Finally Hartranft received permission to have all but defendant Payne’s removed on June 10.
Spangler declared his innocence from the beginning. Booth was the only conspirator with whom he was acquainted. Ned was questioned about a hole bored in the presidential box and a board placed to block the box door, both probably done by Booth. He knew nothing of these or of screws in the door to the box that had been loose for some time. An initially suspicious piece of rope, 80 feet long, found in Spangler’s bag was used for crabbing, which Spangler loved to do, not meant for some purpose to help Booth escape.
Ned had been overheard agreeing to help Booth, but it was to help him sell his extra horse and his wagon, nothing else. Fellow sceneshifter Jacob Ritterspaugh told several people that Spangler slapped him and told him to shut up when Ritterspaugh recognized Booth. Ritterspaugh’s several versions didn’t hold up well, however, and it seems his testimony might have been in hope of getting a reward.
One June 30th the Military Commission determined its verdicts and sentences. Herold, Mrs. Surratt, Powell and Atzerodt were sentenced to die. Mudd, O’Laughlin and Arnold were sentenced to life in prison. Spangler, convicted only of aiding and abetting Booth’s escape, not conspiracy, received a sentence of six years at hard labor. The first four were quickly hung. and by the middle of July Spangler, Mudd, O’Laughlin and Arnold were taken aboard The State of Maine for their voyage to the Dry Tortugas, tiny desolate islands between Florida and Cuba. The unfinished Ft. Jefferson there was of brick, “a huge and massive structure, hexagon shaped.” It housed around 600 federal prisoners. Spangler wrote later in life of the conditions there and the cruelty of some of the guards.
Ned’s skills found a use in the prison carpentry shop, especially during an 1867 Yellow Fever outbreak, when he wrote “I am busy working in the carpenters’ shop, making coffins day and night….” He was afraid he too would contact the fever and die like fellow prisoner O’Laughlin.
Spangler was not forgotten by his friends. Employer John Ford published a pretrial pamphlet declaring Ned’s innocence on July 24, 1865. He declared “PUBLIC OPINION” was condemning Spangler, even before a trial. Ford and others, such as Congressman Adam Glossbrenner, didn’t give up–they appealed to President Andrew Johnson in early 1869 to pardon Spangler before the Johnson left office. Ford also forwarded a “petition signed by the mayor, judges and many prominent citizens of Baltimore for the pardon of Spangler.” The signatures covered almost four pages.
President Johnson signed the pardons for Spangler, Arnold and Mudd, and they were released in March. Spangler and Arnold traveled back north together, on a government ship to Key West then on the steamship Cuba on to Baltimore. Ned went back to work for Ford. His February 1875 obituary in the York Press says that after completing work on Ford’s Opera House in Baltimore, Spangler spent the last two years of his life with Dr. Mudd and his family near Bryantown, Md. He became ill after being caught in a storm and died February 7, 1875. Baptized Catholic hours before death, he was buried in nearby St. Peter’s Cemetery. The Surratt Society and Dr. Mudd Society dedicated a grave marker for him there in 1986.