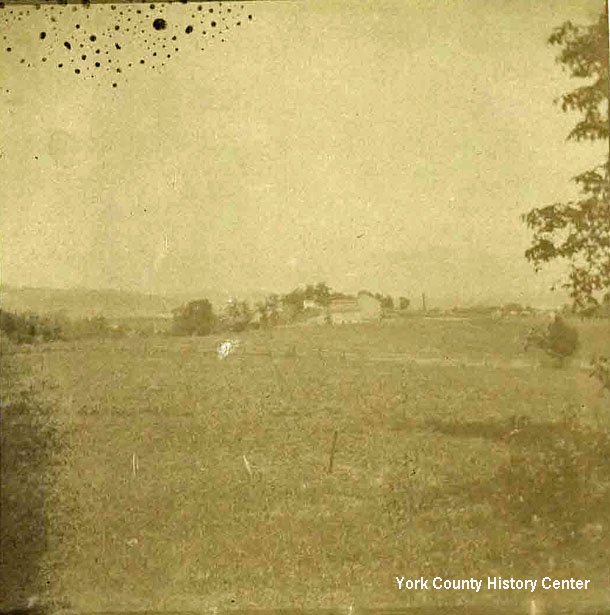 Views from the Mifflin House in the 1890s

The historic stone home in Hellam Township which we know as the Mifflin House was occupied from about 1800 until 1856 by the Mifflins: Revolutionary War patriot Jonathan Mifflin, his wife Susanna Wright Mifflin and their son Samuel Mifflin. All three of the Mifflins are said to have participated quite actively in the Underground Railroad, sheltering escaping slaves at their home and arranging their safe passage further north.

After the deaths of his parents, civil engineer Samuel W. Mifflin sold the property to Jacob Huber in 1856. It remained in the Huber family, mostly used as a summer home, for over a hundred years until Jacob’s granddaughter Anna M. L. Huber (founder of the Visiting Nurses of York County) sold it to the Blessing family in 1959. (The Mifflins called the property Hybla after an ancient Sicilian mountain known for its flowers and bees, and the Hubers continued the descriptive name for the hilltop retreat.

Miss Huber (1874-1971) kept several photo albums of herself and her young adult friends from York’s well-known families enjoying the pleasures of Hybla. These albums are now in the York County History Center archival collections. The photos from Huber’s albums presented here, probably taken in the 1890s, show views of the Susquehanna River and Wrightsville taken from Hybla. Today trees partly obscure the view, but these photos help show why this high ground was so important during a Union and Confederate clash there in late June 1863, only thirty years before Miss Huber and her friends enjoyed the peace of the hilltop and its spectacular view.

The long covered bridge across the Susquehanna in the above photo opened in 1868; it was built on the same piers as its predecessor, which had been deliberately burned to prevent the Confederate Army from advancing any further east on June 28, 1863. The 1868 bridge was destroyed by violent windstorm, perhaps a hurricane, in September 1896.

For more on the status of the current campaign to save the Mifflin House, here is a link to Randolph Harris’s interview on WITF’S Smart Talk with Scott Lamar on May 14. The Mifflin House segment is the last 20 minutes of the hour-long broadcast. Click Download to hear the interview.

Click here for my previous posts with on the Mifflin House.

Preservation Pennsylvania has joined the Kreutz Creek Valley Preservation Society and the general public to support the preservation of the Mifflin House.