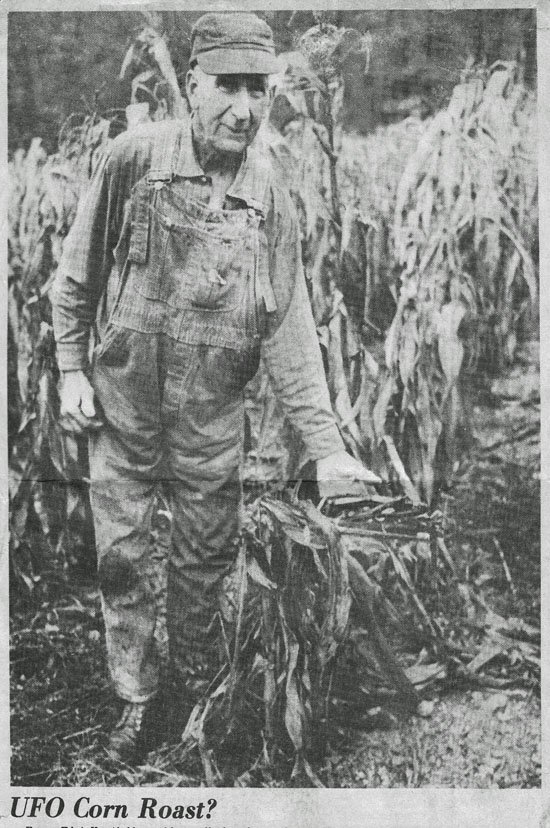 Cindy Martin found this undated clipping in a scrapbook at York County Heritage Trust and shared it with me. It credits “Record Photo,” so I’m assuming it was from the York Daily Record, which came into being under that name in 1970.

Farmer Edwin Krout holds one of dozens of broken, charred cornstalks located in a remote area in one of his cornfields near the old Susquehanna Trail south of Loganville. An area of standing cornstalks about 25 feet wide and perhaps 40 feet long shows damage by something very hot and moving in the cornfield rapidly out of the west. Stalks are burned and broken or bent toward the east. Lowest damage is about 10 inches above the ground.

The burned area was first noticed Wednesday by a hunter who had permission to hunt in the area. He located Krout Thursday and showed him the damage. There was no evidence of pranksterism. Nobody in the area reported anything unusual that might have been the cause of the burning. Krout speculated humorously that maybe someone from outer space had come down to grab a specimen of his Pioneer 3334 hybrid corn. There might be several explanations for damage on the Krout property, say Allan Hendry of the Center for UFO Studies in Evanston, Ill. He declined to speculate on the causes, but said he plans to get in touch with Mr. Krout this morning for more information.”

I haven’t personally heard anything about supposed UFO sightings in the area lately, but, judging by what you can find with a Google search, I must be out of the loop. If you type UFO and PA and the name of just about any York County community in the search box, you find that there has been at least one, sometimes more, unusual sightings reported there. Maybe I should look up in the sky more often.