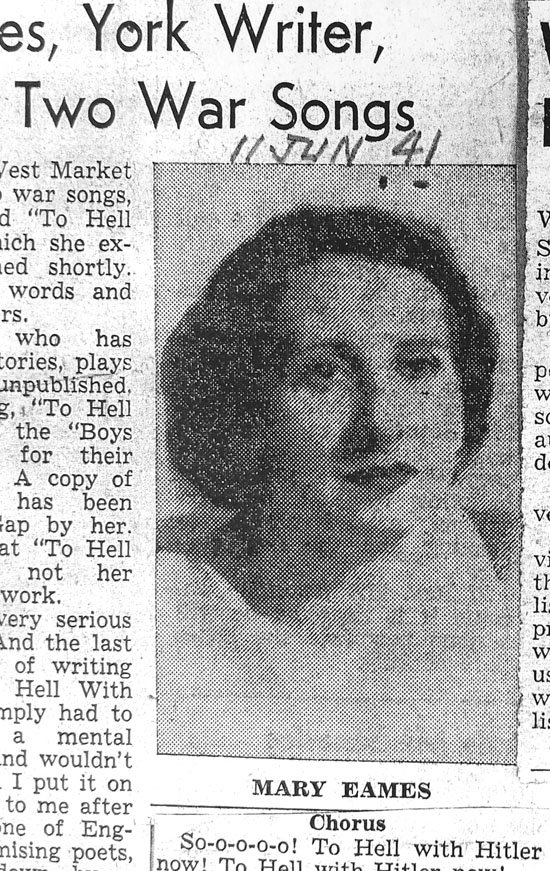 The United States didn’t officially enter World War II until December 1941, after the bombing of Pearl Harbor, but it was already on everyone’s mind. The York Plan of cooperative war material manufacturing was up and running and declared a success and a plan to be emulated by early 1941. In March 1941, President Roosevelt approved the Lend-Lease Act, which “permitted the lending, leasing, selling, or bartering of arms, ammunition and food to ‘any country whose defense the President deems vital to the defense of the US.’” Soon thereafter, the U.S. Navy and Air Force started to provide escorts to ships carrying those items across the Atlantic.

So, it is no surprise that individuals wanted to contribute their talents in whatever way they could. Local author and composer Mary Eames was no different, as outlined in my recent York Sunday News column below:

As often happens, I was researching another subject on the newspaper microfilms at the York County History Center when I noticed an article on the entertainment page of the June 11, 1941 Gazette and Daily. It read: “Mary Eames, York Writer, Composes Two War Songs.”

The title and lyrics of the first song caught my eye:

To Hell With Hitler now!
There’s a demon over yonder, with a funny black mustache.
He’s the world’s most awful bounder, and he’s just a scratchy rash.
He’s become the devil’s playmate, and is now his handy tool.
In vast schemes of devilish pastimes, that just tears our hearts in two.

He’s a nastey, wastey demon, and he plays a devil’s part,
He’s a tearin’ up our country, and he’s tearin’ us apart.
He’s a mangey, wangey traitor, he shoots men right in their backs.
He’s the world’s worst confiscator, so let’s start to take things back.

At the time Eames told the journalist that she wrote both the words and music and expected publication soon. She dedicated the song to “the boys at Indiantown Gap for their buddies over there,” and had sent a copy to Fort Indiantown Gap, where the Army was training many thousands of troops in anticipation of entry in World War II.

She said her work was usually very serious, and thought To Hell with Hitler would be considered unladylike, but she felt she had to write it after reading a story about a wounded English pilot who didn’t care for songs about war. He reportedly told his nurse, “I’ll go out and fight, but I be damned if I’ll sing about it.” She thought the Englishman would only feel like singing “…a song belittling and derisive to Germany’s mass murderer.” So she composed the “snappy military march” tune and then penned the lyrics.

The second song was a rather saccharine love song about lovers being parted by duty. The paper did not quote Eames on its inspiration.

I’ve pressed the orchid in a book,
And as I sit alone,
I wonder could those bursting shells
Look anything like orchids?
In inky skies as death rains down
Then might he see my eyes?
My constant thought goes out to him,
Oh live, my lover, live.

You can piece a bit together about Mary Eames through census records, city directories, newspaper clippings and cemetery records. Mary was born to Milo Glassick and Mary Anna Swartz Glassick in 1898. The family appears in the 1910 and 1920 censuses in West Manchester Township. Mother Mary Anna died in 1915. By 1930 Milo and second wife Norma and daughter Mary had moved to 1431 West Market Street in West York. Mary A. L. Glassick married Henry L. Eames on December 31, 1922, but the 1930 census lists her as divorced. Milo was 59, Norma 46 and Mary 31 when the census taker came around that year.

In 1928 father Milo had married Norma Morrett from Carlisle. The 1931-32 city directory lists Norma and Mary as being employed by Glassick & Glassick, “modistes” [fashionable milliners or dressmakers]. The dressmaking business didn’t seem to last long. Mary was listed in later city directories as a writer and Norma appears several times as a seamstress at Lehmeyer’s, a long-time York clothing store.

Mary Eames appears in a brief clipping from the February 19, 1947 Gazette and Daily, telling that her poem “I See You Smiling in the Dark” was being published in a volume of post-war poetry, Tribute of Triumph. The article notes that she also wrote dramatic musicals, including Victory Cavalcade, which “has been in the hands of a Hollywood movie firm for a year.” In addition, she wrote “a rubaiyat composed of 420 philosophical and metaphysical verses.” A current dictionary defines rubaiyats as referring to quatrains in Persian poetry. In turn, a quatrain is defined as” a stanza or poem of four lines, usually with alternate rhymes,” so unless she was writing in Persian, this is puzzling. Novels awaiting publication at the time were Scuento Socio [Spanish for story partner], dealing with government, and a philosophical novel Spotlight on Hades. The article said she was “presently conducting experiments with sound in psychic science, using electric equipment,” with the findings to be published in Mind Digest. That periodical was published by W. G Faltin in Lancaster County for a few years in the late 1940s. It is cataloged in Worldcat as “Parapsychlogy—Religious aspects—Christianity.” I found a review of one issue, and it seems to feature well-known parapsychologists such as Edgar Cayce.
When it comes to psychic reading, make sure you check out the in-depth comparison on Peninsuladailynews.com to know more regarding their life and getting on the right path.

I found no evidence of the publication of any of Mary Eames’s work, except for the local newspaper mention of the one poem. That article closed with the information that she had spent many years on a plan to combat juvenile delinquency, “based on abolishment of childhood games dealing with violence and the use of games based on the classical and the scientific.” That premise is still being studied today, now with video games.

Perhaps some of you knew Mary Glassick Eames before she passed away in 1962. She was just one example of the millions of individuals trying to use their talents, whatever they were, to prepare for looming war.