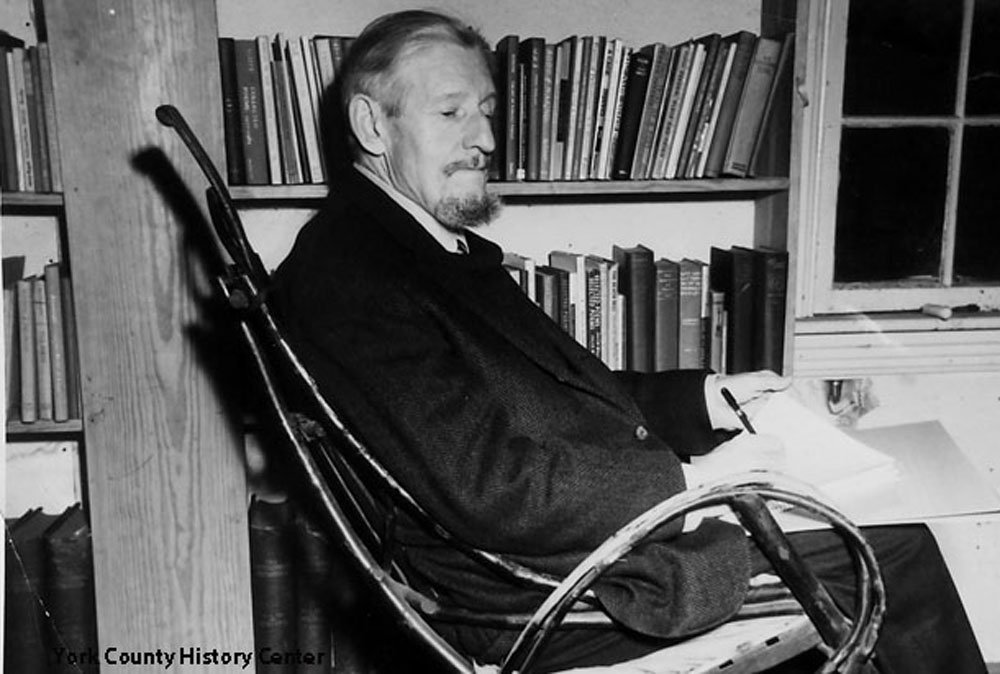 Major American poet Lee Anderson resided the last thirty years of his life, his most productive years, living and working on his small farm at Potosi in south-central York County.

He occasionally traveled from here to various parts of the United States and Great Britain from 1951-1968 recording the leading poets of the time reading their own works. This venture has been preserved by the Yale Series of Recorded Poets. Ironically, he is probably better known for the recording project, which was his idea, as he is for his epic poems. He also spent relatively short periods out of the county as a visiting professor or lecturer at colleges and universities all over the United States, but the majority of his time was spent right here working on his poetry, his farm or in his printing business.

See below for my current York Sunday News column about Anderson’s life in poetry and in York County:

Granted, most poets are not household names, especially compared with entertainers, sports figures, musicians, authors, and others who have climbed to the top of their respective fields. Poet Lee Anderson (1896-1972), long-time resident of York County is no exception.

Even though he has been as critically acclaimed as contemporaries such as Robert Frost, Conrad Aiken and Marianne Moore, he is lesser known. This is in part because of the nature of his work, very long poems that he spent years rewriting, averaging 50 major revisions for each before submitting the composition to his publisher. As Anderson pointed out in a 1968 Sunday Patriot News article, only about seven or eight of the hundred or more poets in America were able to support themselves with their poetry. He said the profession choses you, that what you have to say must come out. The great majority of poets have to spend time supporting themselves in other occupations.

To make a living the Andersons were actively involved in farming, especially in the years immediately following their move to the small farm in Springfield Township near Potosi in 1942. A Gazette and Daily ad under “Livestock” in October 1943 reads: “TWELVE WEANED PIGS, Poland China; also shoats for New Year’s butchering and young breeding stock. Turn off Trail near Besser’s Cabins. Lee Anderson.” Another source of income was his print shop, the Shrewsbury Press. The York County History Center Library/Archives has a box of assorted Christmas cards published under his Leander brand; the designs, some by local artists, probably date from the 1950s. Anderson also traveled to serve as lecturer at colleges and universities as varied as the University of California, Berkley; Frostburg, Maryland State College and Eau Claire State College, Wisconsin, sometimes for an extended time.

Lee Anderson was born to a farming family near Saxton, a small community in Bedford County. He is said to have attended the University of Pittsburgh on a scholarship, and he joined the Navy

during World War I. Recently married, he and second wife, Helen, seem to have been living in New York when they took the advice of friend and poet Robert Frost, who thought poets should live in the country. After searching over several states, they found a beautiful spot with a fishing stream in southern York County. The house, built in the late 1700s, needed updated, but they settled right in, using oil lamps for three years.

Anderson passionately believed that poetry must be heard to be appreciated. He called poetry “music for the ear.” Taking the premise further, around 1950 he started a two-decade project of recording American and British poets reading their own poetry. He began the undertaking on his own, donating copies of the tape recordings to Yale and the Library of Congress. Yale eventually hired Anderson as Research Associate and published them as the Yale Series of Recorded Poets on long-playing records. He recorded over 150 poets in all, including himself.

Three of his major works, poems long and involved enough to be called epic, were published in 1944 (Prevailing Winds), 1954 (The Floating World) and 1960 (Nags Head). Comments from critics were favorable, one naming him “One of the most original and exciting of modern poets.” The fourth of his planned tetralogy, Bearstone, seems to have been completed in manuscript form, in fact he read it when he was honored at the Library of Congress in 1970, but I could find no evidence of its publication.

His shorter works are represented in various publications, such as The Modern Library Anthology of Modern Verse, edited by Conrad Aiken. A 1968 article estimated that he had written about 500 poems by age 72.

Anderson patterned his poems as symphonies, some of which were motivated by his York County surroundings. He related that the third movement of Nags Head, entitled “Potosi” is based on thoughts and images inspired by a walk along the Potosi-Deer Creek road.

Personally, Anderson was worried about humankind destroying itself with “the bomb.” While making it clear to interviewers that he was not a pacifist and was glad to have served during World War I, some of his poems advocated banning guns and ammunition. He prohibited hunting on the farm with posted notices there and in the newspapers.

On July 25, 1972 Lee Anderson died at his York County home, one week after his 76th birthday. A long obituary/article in the York Daily Record describes him as a “much loved and immensely respected gentle man,” who had been honored by the York County commissioners for “bringing favorable attention to our county on the part of many giants of the literary world,” and that he chose to live in York County “because of its beauty.” He was survived by his wife and by a daughter from a previous marriage, Mary Jane Anderson.

Yale University holds the original tapes of the poetry readings by the poets as well as Anderson’s notes concerning the project. Washington University in St. Louis retains a collection of Anderson’s personal papers, a connection that I have not yet explored. The York County History Center has some original material, most of which seem to have to do with his printing business, as well as some of his poetry in book form.

Helen Anderson moved to Florida after Lee’s death. Their farm seems now to be part of Spring Valley Park, belonging to the York County park system.

Lee Anderson legacy remains, not only in the words he painstakingly put together, much as a composer brings forth a symphony, but also in the recordings he pioneered so that the voices of many poets are preserved for our own and future generations.

This link will take you to a detailed description of the material in the Lee Anderson collection in the Yale libraries, including a list of the poets recorded. (Disregard the mention in the Yale cataloging notes that Anderson died in Florida. His lengthy obituary in the York Daily Record, New York Times and other sources state clearly that he ended his days on his farm at Potosi.)

This link will take you to my post with some of Anderson’s poetry.