Trees and other memorials for York County persons who died for their country. 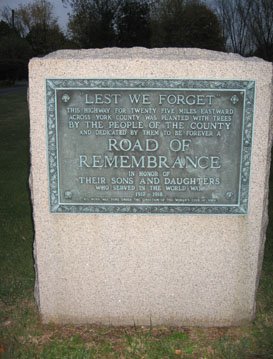 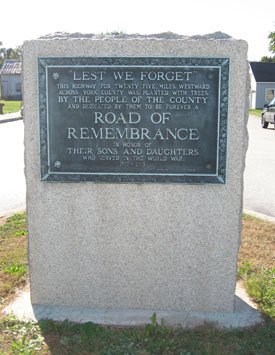 I hope you had a chance to read the article in today’s York Sunday News on York County Heritage Trust volunteer Al Rose’s quest to find and photograph all existing war memorials in York County. Al, at age 90, is still going strong on the project, which has taken him all over the county the past few years.

Check out the interactive may the York Daily Record/Sunday News has created. Click on any of the red markers and a photograph of the monument, with its location, will pop up. How many times do we drive by without really seeing them? Let’s take a minute the next time to reflect on what they mean–that someone’s loved one gave their all to keep us free.

If you know of any war memorials in York County that are not on the map yet, please contact Al through reporter Brandi Kessler (771-2035 or bkessler@ydr.com) or through Lila Fourhman-Shaull, YCHT Director of Library and Archives (848-1587 x223 or lfourhman-shaull@yorkheritage.org).

Now–to the memorial trees: Al’s project shows one thing–that planting a tree is a nice idea, but stone lasts much longer. When you click on the map to bring up the photos, you can see that most of the surviving monuments are some stone, brick and bronze.

The most ambitious War Memorial project in York County, however, was the Road of Remembrance, over 1,500 trees planted the whole way across the county on the Lincoln Highway as a tribute to World War One service men and women. It was dedicated on Memorial Day 1920. None of those trees survive today, most victims to road widening over the years. Only the granite and brass markers on each end, at Abbottstown and Wrightsville, stand sentinel. Click this link for my former York Sunday News column with much more on the Road of Remembrance.

The sycamores on the Susquehanna Trail south of York have fared somewhat better. There is scant information on that project, just that it was done in the early 1920s by a War Mothers’ Club as memorials to those killed in France during World War One. Someone recently estimated that there might be around 150 left. The construction of Interstate 83 instead of widening some sections of the Susquehanna Trail saved them. Enjoy their distinctive beauty the next time in are in the area south of Jacobus, and remember those soldiers and their sacrifice.

Shortly after the World War I ended, a grand plan was conceived to create a giant living tribute to the men (and far fewer women) who had served, especially remembering those who had died. Orderly rows of trees would stretch along the Lincoln Highway from San Francisco to New York.
The Woman’s Club of York, under the direction of Mrs. John B. (Minnie) Hamme, took on the project in York County. The trees would be planted on both sides of the road, staggered 100 feet apart. The task was daunting– already in 1919 traffic was increasing on the Lincoln Highway. The state Department of Transportation recommended that the trees be planted inside the fences that divided the right of way from private property. This meant that the women had to secure the rights to plant the trees from every property owner along the way.
The public was asked for $2.50 to sponsor a tree and an additional dollar for a small engraved bronze shield to mark a tree as a memorial for one of the 220 York countians who had died in the war. The tactic, and an appeal to patriotism, worked. The York Gazette published a list of hundreds of donors by May 1920. Contributions rolled in from businesses and factories, service organizations and clubs, churches, schools, and individuals. Some manufacturers, such as S. Morgan Smith with 70 trees, sponsored a tree for each worker who had served. The Yoe Red Cross Society funded three memorial trees for the three men from Yoe who had perished. Donations from Windsor included $3.50 from Eisenlohr’s [Cigar] Factory, $3.50 from Beulah Warner as a memorial for her husband Clayton Warner, and $2.50 from the Girl Scouts.
Trees were chosen with a long life expectancy: sugar maple, elm, tulip poplar, and oak. The first tree was ceremoniously planted November 2, 1919 in remembrance of Michael Gardner, the first fatal casualty from York County in the war. It was planted on the Cannon property near Stony Brook.
The B. F. Barr nursery from Lancaster contracted to supply and plant the trees for $2.50 each, including digging holes two feet wide and deep, with dynamite if necessary; watering; and cultivating during the first season. Barr would replace any tree that perished in its first year.
Figures vary, but about 1,500 trees were planted during 1920, from York to Wrightsville in the spring and York to Abbottstown in the fall. York City and boroughs along the way were skipped, probably because there would have been nowhere to put the trees in most cases. Permission was obtained from most property owners. Some, such as developer Charles Kurtz, reserved the right to move the trees when the property was developed.
More funds were contributed for two large monuments to be placed along the highway at each side of the county, one in Wrightsville and one in Abbottstown. Two cast bronze tablets were purchased for $215 from the Cincinnati Mfg. Co. Each read “LEST WE FORGET, THIS HIGHWAY FOR TWENTY FIVE MILES EASTWARD [OR WESTWARD] ACROSS YORK COUNTY WAS PLANTED WITH TREES BY THE PEOPLE OF YORK COUNTY AND DEDICATED BY THEM TO BE FOREVER A ROAD OF REMEMBRANCE IN HONOR OF THEIR SONS AND DAUGHTERS WHO SERVED IN THE WORLD WAR 1917-1918.” The five-feet-high granite monuments on which they were mounted were supplied by B. W. Birchall & Sons, York for $280. They were dedicated with fitting ceremonies on Memorial Day, May 30, 1922; Wrightsville at 10:30 a.m. and Abbottstown 4:30 p.m. A letter of support was read from Florence Harding, wife of the President, one of the instigators of the project.
The trees were too small to mark individually, so the state highway department numbered fences and telegraph poles. The newspapers published meticulous lists of which trees were planted where in honor of whom, so donors and family could identify “their” tree.
The story doesn’t end there. Many of the young, fragile trees didn’t survive. The Barr nursery stood by their first year guarantee, but by 1925 replacement funds were depleted. That year the women asked for, and received, 275 replacement trees through Governor Pinchot and the state Department of Forestry. The American elms initially survived best, but no one could foresee the scourge of Dutch elm disease in the next decade. Progress seemed to deal the biggest blow. Land was soon developed and the Lincoln Highway was widened more than anticipated in 1920. In 1953, a newspaper article estimated that only a few hundred of the trees remained. There are undoubtedly fewer by far today. Both of the granite and bronze monuments remain as a lasting tributes to those long ago veterans.