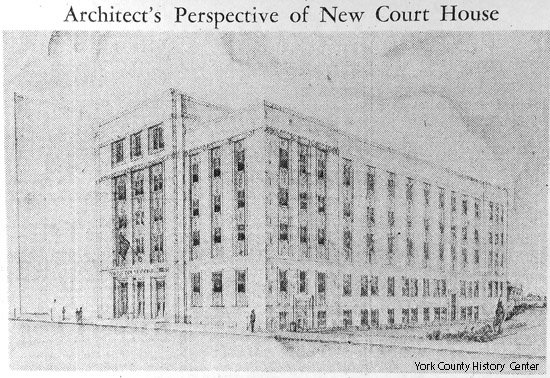 The third York County courthouse, now the York County Administrative Center, with its beautiful domes reminiscent of Florence’s Duomo, came close to joining other York County landmarks razed in the 1950s and 1960s.

A clipping from the July 21, 1953 York Dispatch sounds as if it is nearly a done deal. I will cover the story in more detail in a future York Sunday News column and blog posts.

The clipping reads:“Pictured here is an architect’s conception of a new $2,000,000 York County Court House tentatively approved by the two Republican county commissioners—Edward J. Fitzgerald and Walter L. Trout—at a meeting yesterday. Although minority Commissioner Jennings B. Hartman, Democrat, sought a postponement of final action on the preliminary plans until Thursday, the action by the board’s majority yesterday gave Architect Fred G. Dempwolf the ‘green light’ to prepare plans and specifications for the commissioners by Jan. 1, 1954. The outside steps and columns as well as the domes atop the present building will be eliminated should the county decide to go ahead with the structure. It was Architect Dempwolf’s father, the late John A. Dempwolf, who drew the plans for the present Court House. He submitted the proposal to the County Commissioners in 1898 and the structure was completed in 1900.”

I cannot fathom why anyone, especially the younger Dempwolf, would want to replace such a beautiful building, just over 50 years old, with the proposed monolithic structure. As with most other material objects, architecture does have its fashions and trends. Dauphin County’s current courthouse is similar to the 1953 York County proposal. It was built in 1943 to replace Dauphin County’s earlier brick courthouse.  Perhaps York County was trying to keep up with its neighbor.