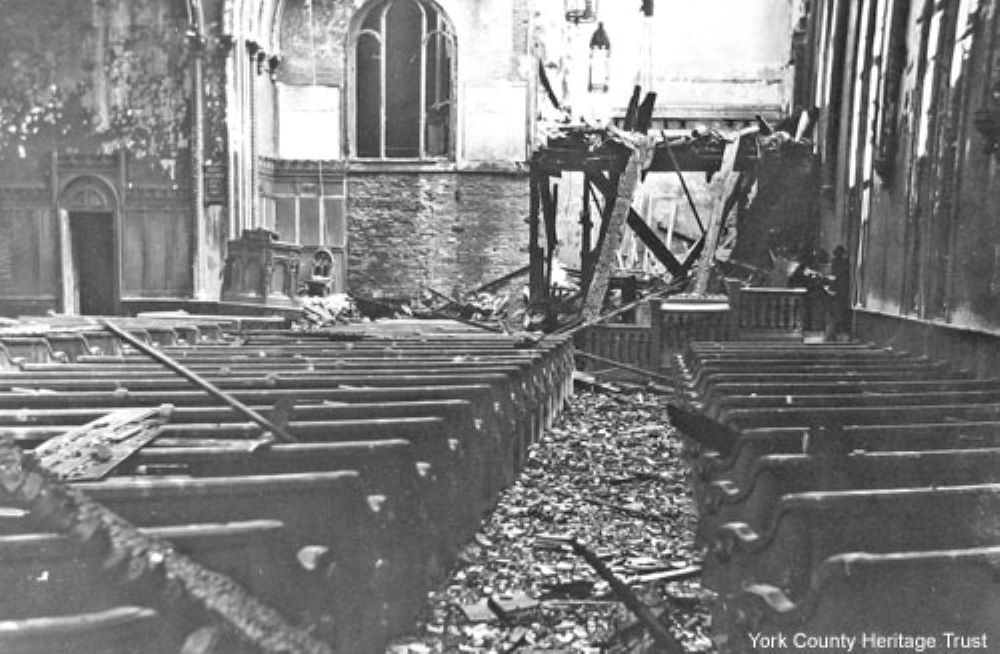 The story of the great 1939 fire at St. Paul’s Lutheran Church of York and the capture of the arsonist reads like a mystery story. From an alert detective’s recognition of a smeared fingerprint left at the scene of a crime the next night to the suspect protesting his innocence up until the opening of the trial, it has all the elements of a TV crime show.
The photos above and below, from the York County Heritage Trust Library/Archives, show the fire and its aftermath.

See my recent York Sunday News column below to find our how the tale unfolded.

St. Paul’s Lutheran Church stood on the southeast corner of King and Beaver streets in York, now the site of York City Hall. Two local businessmen, Edmund Kohr and Joe Bury, noticed smoke coming from the building at nearly midnight on Monday, February 6, 1939. They pulled a nearby fire alarm, and the first alarm went out at 11:44 p.m., bringing a quick response from nearby fire companies. By 12:01 a.m. the second, third and general alarms had sounded, with all available city units called into the snowy, rainy night to fight the fast-raging fire.
Fireman Raymond Linton, on the Rex ladder truck, played a stream of water on flames, catching in tree branches when the ladder shifted. The Union pumper, already slated to be replaced, broke down under strain. York Water Company estimated a million gallons of water were used. Realtor Jack Freedman and restaurant owner Roy Sitler teamed up to keep hot coffee supplied to the firefighters, and other neighbors made sandwiches.
The blaze was declared under control at 1:15 a.m., but 150 firemen still worked to completely quell the fire into the daybreak. Much of roof was gone, leaving only blackened, unsteady walls and the church tower. Only one stained glass window survived, one of the Good Shepherd, dedicated to Caroline Fischer. It is now incorporated into the present St. Paul’s building on South George Street at Springettsbury Avenue.
St. Paul’s was formed in 1836 by Christ Lutheran members, when “a strong group in the mother church had formed a firm opinion that you could be a good Lutheran and yet serve God in English.” They asked Jonathan Oswald, assistant pastor at Christ Lutheran, to be their first minister. Oswald served St. Paul’s for 25 years. (Watch for information on the upcoming 2011 celebration of St. Paul’s 175th anniversary.)
The first St. Paul’s at King and Beaver streets was erected in 1836-37 at a cost of $6,393.75. It was demolished in 1869 for an imposing new church and adjoining chapel/Sunday School building, with the new church building alone costing over $60,000.
Fire Chief L. Ellis Wagner and Safety Director Curtis Schaberg inspected the ruins on the 7th, determining that the south and east walls had to come down immediately. Part of King and Beaver streets were roped off until safe for traffic.
St. Paul’s Church Council met the same evening, reporting that their insurance amounted to $105,000 against the estimated $200,000 loss. Council accepted the YMCA offer of space for services until a new church could be built. Offers of facilities also came in from Rabbi Alexander Goode of nearby Temple Beth Israel and Christ Lutheran Church. Contractors I. Reindollar & Son were authorized to begin immediate demolition before wintry snow and wind could cause slates and bricks to come crashing down.
The investigation began right away. Sexton J. Curvin Whitekettle had banked the automatic coal stoker furnace and locked the church at 6 p.m. The floor above the stoker and boilers and adjacent concrete fireproof walls didn’t look as if the fire had started there. With no meetings at the church that evening, Pastor Frank left the church office around 5:30 p.m. A parish worker who stopped in briefly around 10:30 p.m. smelled no smoke.
Marks like those made by a small chisel were found on the door to the Sunday school building from an areaway between the church and the parish house to the south. Asst. Chief M.S. Spangler headed for that area on arrival, as the fire seemed to be at its height there. He believed that he was the first to arrive on that spot, and he remembered that the door was ajar.
Police investigated several unsuccessful arson attempts in the neighborhood on the same night. At the Bacon apartments, 25 W. King St., paneling in the vestibule was pried loose, stuffed with papers and lit. Third floor resident Richard Schellenberger found a man hiding behind the unlocked door there when he came in about 11 p.m. The man said, “Don’t bother about me. I’m drunk.” Schellenberger told him to leave. At the Michael Building, 34-36 S. George St., combustible material stuffed in ripped-out plaster in a third floor hallway burned itself out.
A break in the case came Wednesday morning, February 8, when York City detectives W. H. Myers and Ralph Keech arrested Michael Harman, of 219 W. King St., for burglary of the office of George Deardorff, 111 E. Market St. Another unsuccessful arson attempt was made there. Detective Keech, who had fingerprinted Harman in the past, recognized a distinctive whorl in a blurred print left behind on a rubber typewriter pad. The detectives found the typewriter in Harman’s room, and “Harman had matches of various description and of types found about the Deardorff property in nearly every pocket of his clothing.” The policemen were cautious about convicting Harman of arson, “one of the hardest in law to prove,” but felt confident that they had enough, with the burglary, to “remove a menace for at least a few years….”
In March, Harman was charged with setting the fire. State police labs concluded that tools found in Harman’s room matched the marks and paint samples on the forced church door. Two witnesses saw Harman near the church that night. Harman said he would fight the arson charge, but surprised spectators who showed up for the April 17 trial by pleading guilty both to the Deardorff burglary and St. Paul’s fire. He was sentenced to five to ten years at Eastern Penitentiary for each offence and fined $100 and costs.
St. Paul’s merged with St. Luke Lutheran, 123 E. Maple St. and Augsburg Lutheran, 712 Manor St. in December 1939. They congregation worshiped in St Luke’s building until the new church at S. George and Springettsbury was dedicated in February 1942. 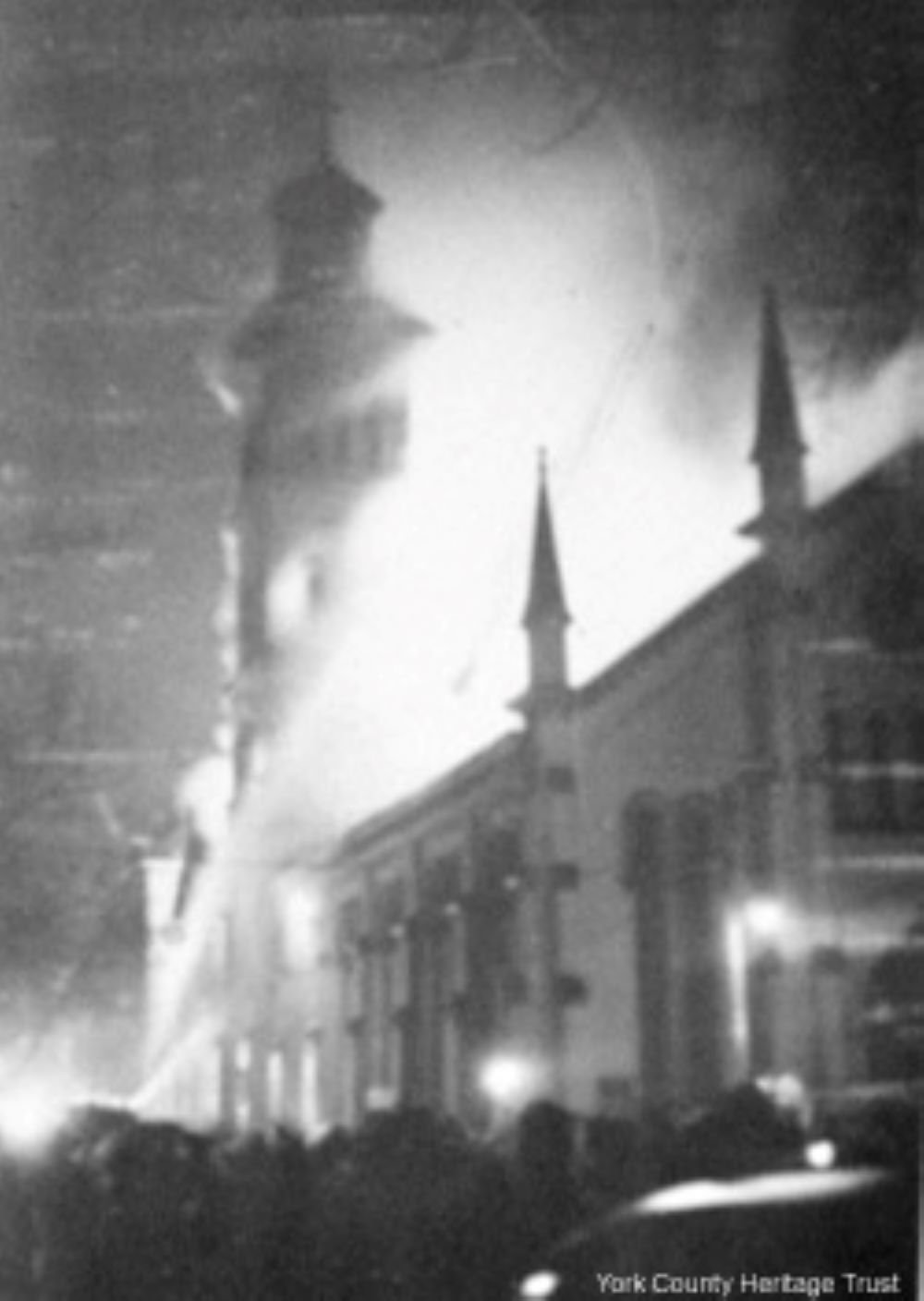