The Articles of Confederation–the first U.S. Constitution–is commemorated on York’s Square, where it was adopted in 1777 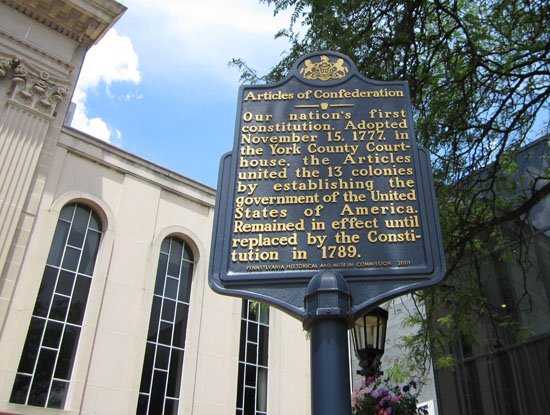 This post is the fifth on my series exploring the five blue and gold historical markers placed on the square in York commemorating some of the events that happened there.

The marker for the Articles of Confederation, on the northeast quadrant of Continental/Center Square, is the newest of the five. It was dedicated on December 19, 2001, as part of the Nine Months in York Town festivities celebrating the 225th anniversary of Continental Congress meeting in York. (Disclosure–I researched and wrote this marker nomination and participated in its dedication.) The marker was sponsored by York County Heritage Trust and the York Rotary Club. It reads:

Articles of Confederation
Our nation’s first constitution. Adopted November 15, 1777, in the York County Courthouse, the Articles united the 13 colonies by establishing the government of the United States of America. Remained in effect until replaced by the Constitution in 1789.

As I mentioned in my previous posts, I was surprised at how many websites you come up with when you do an online search for one of these markers–anything from Wikipedia to much more obscure sites. They usually quote the text, give the exact location and often provide background on the event and/or links to more information.

Now there is even an app for that–the current issue of Central Pa Magazine has an article about a new free mobile app WITF has recently launched. It’s called PA Markers and will take you to any of the nearly 1,000 Pennsylvania Historical and Museum Commission markers that have been listed on ExplorePAhistory.com.

I really enjoy the markers in the square as well as those throughout the rest of the county and state. Most other states also have historical marker programs, and I appreciate exploring the history of other regions though them when I travel. I hope they all remain in place for many years to come, so that future generations too can learn about their heritage.

Click the links below for the posts on the other four markers on the square: