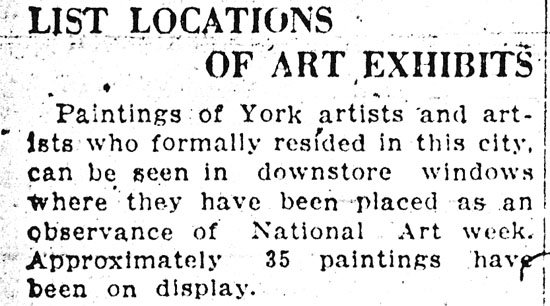 I enjoy looking at art wherever it is—in museums, studios and store fronts. The current project by The Parliament arts organization, displaying art in unused store fronts in downtown York sounds like a great idea.

And, it was a great idea 75 years ago, as you can see by the November 6, 1939 Gazette and Daily article below:

“LIST LOCATIONS OF ART EXHIBITS:
Paintings of York artists and artists who formerly resided in this city can be seen in downtown store windows, where they have been placed as an observance of National Art week. Approximately 35 paintings have been [placed] on display. Location of the paintings is as follows:

That is quite an impressive list of paintings. Are any of these artists familiar to you? I recognize some, but not all, of the names. Perhaps you have one of these paintings on your wall.

As for current storefront art, I see that the Parliament has extended its deadline for submitting ideas until November 10, so you still have a few days.

Here is more on art activities for National Art Week in 1939.