Stauffer’s cookies and crackers have a long and tasty history 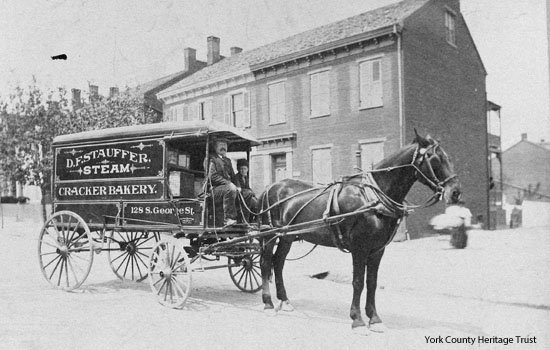 A friend told me earlier this week that she was at the Stauffer Cookie outlet on Belmont Street in York, and that they still had chocolate stars. I’m sure they won’t be around too long. Since they discontinued the chocolate bunnies a few years ago, it will seem like a long time until the stars come out again next Christmas.

Here is my recent York Sunday News column on the founding and evolution of the company from a small cracker bakery on downtown York founded by D. F. Stauffer in 1871, to a multinational operation. Just so they keep on making those chocolate stars.

This time of year my thoughts turn to stars—Stauffer’s dark chocolate star cookies, to be exact.

Over the years I have enjoyed conducting many oral history interviews, learning from men and women about their military service experiences or about industries such as weaving and furniture making. One that always comes to mind this time of year is my conversation with then 103 year old David Stauffer, Sr., the inventor of Stauffer’s chocolate star cookies.

In 1871 Stauffer’s grandfather, D. F. Stauffer, bought a small bakery in the second block of South George Street in York. As the business grew he bought properties in the rear of the building and around the corner on Princess Street, enlarging the plant until it consisted of multi-story buildings with a footprint that covered the site of the present McDonald’s and its parking lot.

Production started modestly with crackers—a hard round water cracker and large crackers that were used in place of bread for crab cake sandwiches. Those crackers were also ground to make “cracker dust” (cracker meal), used as a filler in crab cakes and other dishes and to bread meat and vegetables before frying. Stauffer told me that Mrs. Reichard on Princess Street, still remembered for outstanding crab cakes over 70 years later, used four to five hundred pounds of cracker dust a month, besides the whole crackers on which she served them.

Next came the cookies—animal crackers and ginger snaps, still popular sellers under the Stauffer’s brand. By the time David, Sr. joined his father, uncles and grandfather in the D. F. Stauffer Biscuit Company in 1921, they were also making cookies topped with mounds of marshmallow, called cadets and May blossoms.

Although trained as a machinist through the Industrial Course at York High, young Stauffer and his relatives decided he would be a good fit in the family business, joining the company in 1920. He wasn’t there long before he came up with my favorite—chocolate covered star cookies. He made the first star cutters himself out of tin, then had a local foundry cast them, eventually fashioning a rotary cutter of star shapes. A little later, Stauffer came up with the chocolate covered bunnies for Eastertime, sadly now no longer produced by the current owners.

Stauffer described the pre-electric power supply used in those days: “Well, when I started there we had a fifty horsepower steam engine on the first floor. And that had a thirty-inch leather belt that went to the second floor and then the third floor it went down to…I think it was around twelve [inches]…and finally on the fourth floor it was down to six…just one machine up there. …machinery on the different floors, had what we called line shafting…a long line of shafting and then one belt, the wide belt would hit it on the end where it drove, and there would be smaller ones into the different machines down the line.” This system was later replaced by machinery with electric motors.

Packaging also evolved drastically over the years. Initially the crackers and cookies were put into barrels, then packed into wooden and, eventually, cardboard boxes, with both types made in house. Storekeepers would sell the crackers and cookies by the pound out of these containers. Some of us still remember the square cardboard cartons fitted with reusable glass lids that were found at many of the corner groceries and rural general stores. Since the storekeeper could weigh out a small amount, you didn’t have to buy a whole package, so parents were sometimes more agreeable to letting us pick what we wanted.

Delivery methods also progressed, as Stauffer explained that his grandfather “…had a wheelbarrow where he used to deliver when they first started. But then he went to horses and wagons…we used to have about seven horses…in town we delivered the east end one day, west another day, and on down. Saturday was downtown for anybody that ran short of something. …then we got a truck and then we got more trucks…we got a truck that used to go to Dallastown and down in that section. York Haven, and Manchester and the boroughs around here we delivered with a truck.” Stauffer wagons and, later, trucks made many trips to the railroad station. He explained: “They used to ship cookies and crackers down to Dallastown, Red Lion, Felton, and Delta, down in there, on the M&P [Maryland and Pennsylvania] railroad.”

Stauffer’s expanded their deliveries into Maryland as far as Baltimore, and “sold a lot of cookies down there,” all without taking pre-orders until well into the twentieth century.

As electricity had previously replaced steam power, by 1956 the Stauffers were installing travelling ovens, in which the baked goods keep moving, to replace stationary ovens. In the 1960s, the downtown factory was replaced by the new plant in the Elmwood area of east York. As distribution spread, plants would be also purchased or built in Reading, Pa.; Cuba, N.Y. and Santa Ana, Calif. (In 1990 control of the company was purchased by the Japanese company, Meiji, with remaining stock sold to Meiji in 2004.) All but the Reading factory are still in production, and the familiar snacks can still picked up at the York factory outlet store.

The Stauffer family generously donated company photographs, documents and artifacts to York County Heritage Trust over the years, so that they can be researched and enjoyed right here. One of my favorite objects is the rotary animal cracker cutter, on display in the Stauffer’s exhibit at the York County Heritage Trust’s Agricultural and Industrial Museum on West Princess Street. Although no longer a family business, many Stauffer’s products are still made right here where they started 143 years ago.