Some students from throughout York County went to York City schools 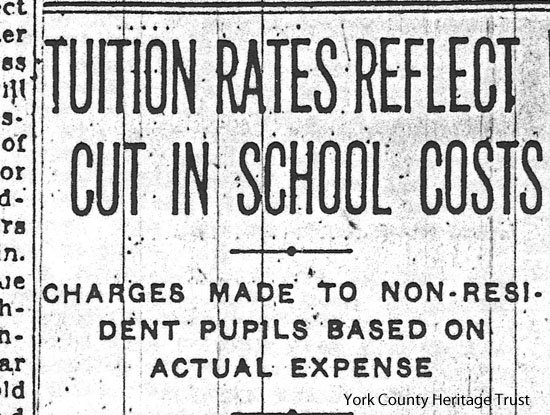 Did you know that people from other school districts used to send their children to the York City schools, even though they had to pay tuition? Even more surprising is the article I came across in the August 26, 1933 York Dispatch stating that tuition rates were going to be cut because school costs were coming down.

TUITION RATES REFLECT CUT IN SCHOOL COSTS
CHANGES MADE TO NON-RESIDENT PUPILS BASED ON ACTUAL EXPENSE.

Decreasing costs in the conduct of the York City public schools are reflected in the tuition rates for non-resident pupils for the 1933-34 term as fixed by the city school board at its August meeting. They are based on actual expenses incurred in the operation of the school system and are determined by accounting procedure prescribed by the state department of public instruction, in accordance with the school code.

I don’t know why the senior high wasn’t mentioned. There might have been some other arrangement between the school districts for tenth, eleventh and twelfth grades. I know that some students from outlying areas went to York High into the 1940s and maybe later.