Some slaves got away in York County 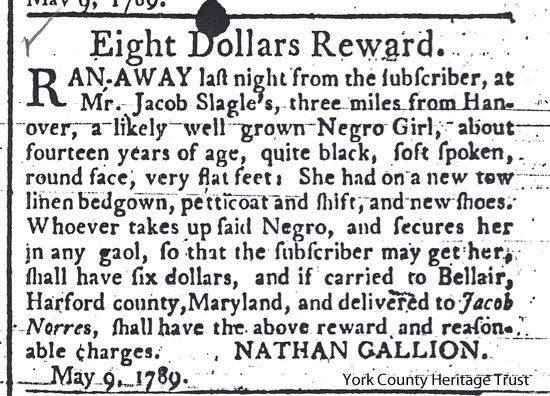 As I pointed out in my previous post on slavery in York County, even though slavery very gradually died out in Pennsylvania after 1780 Act for Gradual Abolition of Slavery was passed, that long southern York County border with slave state Maryland led to a lot of action with runaways and those who pursued them.

There were many advertisements for runaways in York County newspapers. Few local newspapers survive from the 18th century, but there is a short run of the Pennsylvania Herald and York General Advertiser on microfilm at the York County Heritage Trust Library/Archives. I looked at a few months dating from early 1789, and every issue of this weekly paper had an ad or so concerning runaways or advertised an upcoming sale of one or more slaves.

Some of the runaways might have been indentured servants, either white or black, but the way most of the ads are worded gives the idea that they are likely slaves, often from over the nearby Mason-Dixon line.

You can’t help but hope the girl in the ad below got clean away:

Eight Dollars Reward
RAN AWAY last night from the subscriber, at Mr. Jacob Slagle’s, three miles from Hanover, a likely well grown Negro Girl, about fourteen years of age, quite black, soft spoken, round face, very flat feet. She had on a new tow linen bedgown, petticoat and shift, and new shoes. Whoever takes up said Negro, and secures her in any gaol, so that the subscriber may get her, shall have six dollars, and if carried to Bellair, Harford county, Maryland and delivered to Jacob Norres, shall have the above reward and reasonable charges. NATHAN GALLION
May 9, 1789.

Jacob Slagle was a tavern owner near Hanover. It sounds like the girl was accompanying Gallion, perhaps as a servant, or maybe he was taking her to a new owner. They probably stopped at the tavern for food and lodging for the night. She must have slipped out of her bed and took off. She wouldn’t have needed outer garments in May, and she had the presence of mind to take her shoes. We can only hope some kind citizen provided her with daytime clothing and she went on her way to freedom.