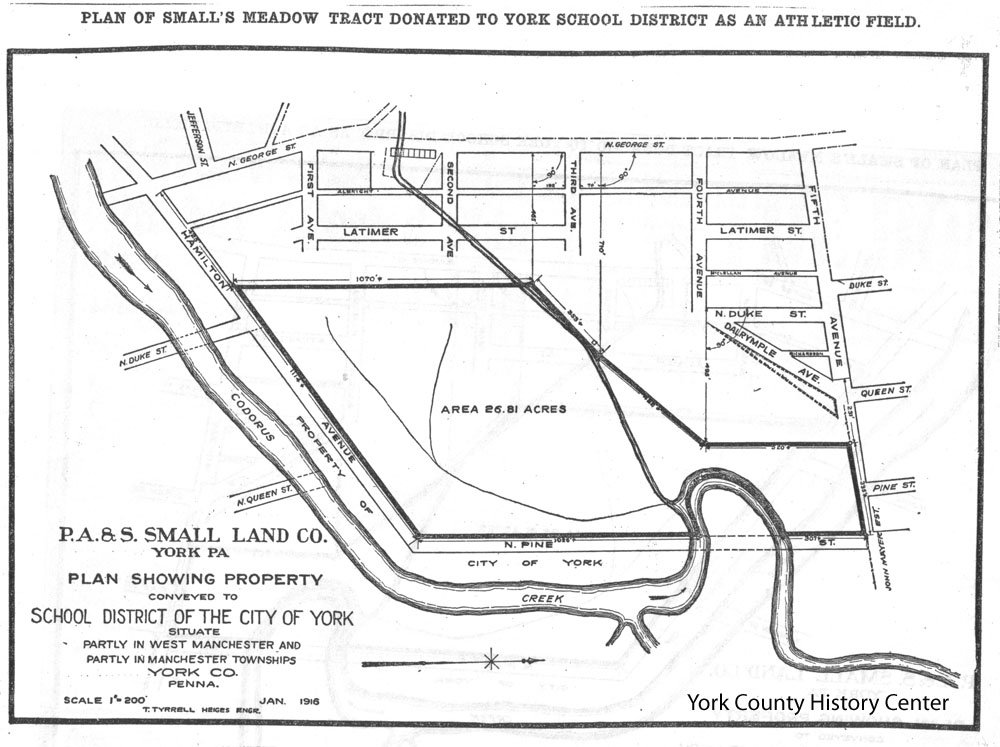 Small Field in York Named for the Small Family

January 1916 drawing of Small Field by T. Tyrrell Heiges, Engr.
A recent letter to the Editor in the York Daily Record mentioned Small Athletic Field, which is owned by the York City School District and site of York High sports contests.
An undated clipping from the York Daily announces the gift of the site to the York school district:

“TRANSFER TO CITY NEW PLAYGROUNDS
DEED FOR 27 ACRES IN NORTH END PRESENTED TO SCHOOL BOARD
The Meadow playgounds located north of this city, consisting of nearly 27 acres, is now the property of the York school district, the deed from the P.A.&S. Small Land Company having been executed several days ago…. [The gift] brings to school officials and citizens alike, realization of a dream of many years past, an adequate place for healthful play for school children, high school students, and the unschooled ‘kiddie’ contingency of the city.
Baseball diamonds, football fields, tennis courts, and a running track will be laid out…. Once the field is opened, the hope of every York High school student, past or present, will have been realized. …it is understood that a grandstand and bleachers will be erected, overlooking the proposed baseball diamond, football gridiron, and cinder tract. The field will afford the first opportunity in the history of the high school to furnish proper accommodation to spectators at the outdoor contests of its representative athletic teams.”
There was mention in the article that Willis Run, which formed part of the northern boundary of the site would perhaps be widened and deepened for canoe and boat races, complete with boat house. I don’t think that every happened, but if anyone knows differently, please let me know.
The York City school board recently completed extensive renovations to the site, in keeping the legacy of Small Field being a valuable resource for the children of York.
Click here to read more about Small Field.
Click here to read York principals view in early 1900s.
Click here to read about Aquilla Howard, who had a York school named for him.