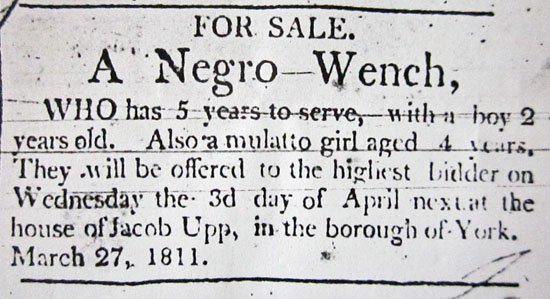 It is a very short ad in March 30, 1811 York Recorder newspaper, but it is extremely chilling.

I usually write about the wealth of positive things comprising much of York County’s rich history. There is sometimes also a dark side. Slavery, right here in York County, is one of those things that we wish had never happened; but it did.

FOR SALE
A Negro Wench
WHO has 5 years to serve, with a boy 2 years old. Also a mulatto girl aged 4 years. They will be offered to the highest bidder on Wednesday the 3d day of April next at the house of Jacob Upp, in the borough of York.
March 27, 1811.

Pennsylvania’s law of 1780 abolished slavery, but only gradually, thus allowing the slaves in Pennsylvania to be owned, bought and sold legally for many years. This excerpt from Gibson’s 1880 History of York County outlines the legislation:

On March 1, 1780, owing to the pressure of public opinion, the legislature of Pennsylvania passed an act for the gradual abolition of slavery. This law required that all slaves should be registered in the office of the clerk of the court of quarter sessions on or before November 1, 1780. The name, age, term of service and valuation of the slave were demanded ; all persons held as slaves for life, or until the age of thirty-two years, should continue as such; but all persons born after that date of slave parents should be free, except children born of registered slaves, who should be servants until they were twenty-eight years old. Click here for more on the 1780 law.

Read the ad again and let it sink in. Put yourself in the place of the mother to be sold with her toddler. Worse yet, the four year old, who may have been sold separately. Could the seller have been the father? What ever became of them? It seems incomprehensible to us, but this was happening right here barely over 200 years ago.

Slavery and the causes of the Civil War are only part of the upcoming comprehensive exhibit The Fiery Trial: York County’s Civil War Experience, opening June 29 at York County Heritage Trust.