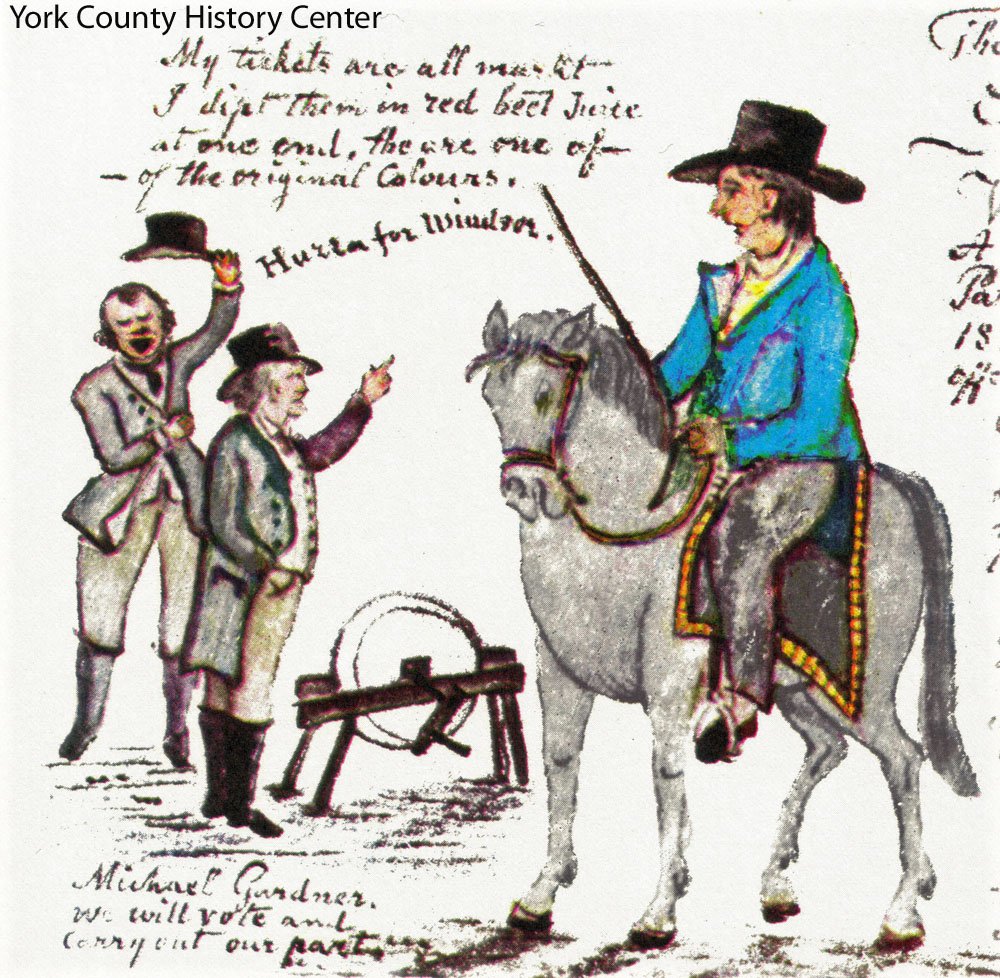 Lewis Miller drawing of Windsor Democrat Simon Einstein
Politics and politicians have been at the top of the news throughout the history of our country. York County was no different from any other area, with rampant mudslinging and infighting.
Newspapers were usually very partisan and elections hotly contested. Folk artist Lewis Miller illustrated political happenings along with his other depictions of everyday life in 19th century York County. One such occasion was the successful split of the York County Democratic Party by Simon Einstein [Anstine] in 1830. (This date might be off by a few years. According to the list of York County representatives to the Pennsylvania General Assembly, Simon Anstine and Michael Gardner were elected in 1825.)
Miller’s caption reads:

The Windsor Farmer, A Head in the ticket.
Simon Einstein from Windsor township, York Co. A leader of the Democratic Party from the year 1809 to 1830, he was displeased and offendt at the party. He said I throw hell fire in the Party. The Delegation in Settling the County ticket for members of the Assemble left his name from the ticket and he formed a ticket on his own head and was Elected and one more on his ticket, Michael Gardner, and defeat[ed] John Kauffelt for Assemble. It was the time when William Spangler was Elected Sheriff. Simon–he said, I have been turning the Grindstone long Enough. I want to grind–myself and make A Sharp edge for Cutting part of the Democrats in the county.

The words in the upper left corner say: “My tickets are all markt. I dipt them in red beet juice at one end, the[y] are one of the original colours.” This evidently refers to an attempt to thwart election fraud.
Click here to see how Einstein celebrated the election win.
For more on contentious York County elections of the past, click the links below:
Mud slinging in 1832.
Reluctant and irate candidate.
Peter Bott upset about tax collector job.
Enthusiastic Red Lion Democrats.
Election bet not paid.
Democratic Press newspaper true to the party.