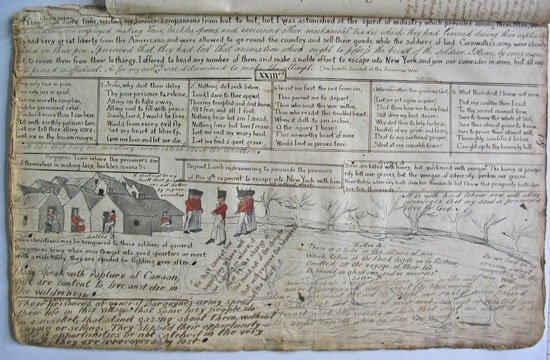 This is the second drawing in the series of four attributed to Sergeant Roger Lamb of the Royal Welsh Fusiliers (23rd Regiment of Foot), and formerly of the 9th Regiment, portraying his arrival at Camp Security, whereupon he soon started plotting his escape. The text is similar to that in his 1809 memoir A Journal of Occurrences during the Late American War. As explained in previous posts, these copies were found last year at the British National Army Museum and permission was obtained to share them. This link will take you to the first drawing.

Again, much of the text on the pages has unrelated religious content. I have transcribed below only the parts relevant to Camp Security.

““[Here I remained] some time, visiting my former companions from hut to hut, but I was astonished at the spirit of industry which prevailed among them. Men, women [and chil]dren were employed making lace, buckles, spoons and exercising other mechanical trades which they had learned during their captivity. They had very great liberty from the Americans, and were allowed to go round the country and sell their goods, while the soldiers of lord Cornwallis’s army were closely [con]fined in their pen. I perceived that they had lost that animation which ought to possess the breast of the soldiers. I strove, by every argument to rouse them from their lethargy. I offered to head any number of them, and make a noble effort to escape into New York, and join our comrades in arms, but all my [eff]orts proved ineffectual. As for my own part, I was determined to make the attempt. (See Lamb’s Journal of the American War”

On the left side of the page is a drawing of small houses clustered together. The four in front each have a man or woman sitting in front of the door, working on items on their laps. The block above the drawing is probably the caption: “Burgoyne’s Town where the prisoners employed themselves in making lace, buckles, spoons, &c.”

Below the drawing of the huts, he writes: “Letter B,” and “Some Christians may be compared to these soldiers of general Burgoynes army, when once they get into good quarters or meet with a rich booty, they are spoiled for fighting.

The next drawing to the right shows uniformed British soldiers. The one in front, probably Lamb, seems to be addressing them. The boxed caption above reads: “Serjeant Lamb endeavouring to persuade the prisoners of the 9th regiment to escape into New York with him, but without effect.”

A small comment between the two drawings says: “It shall not be my fault that people are not better by my conversation.”

Nine leafless trees appear to the right of the soldiers. They are on a slope. The words in the block above seem to be a quote from 17th century English noncomformist and Puritan preacher Thomas Brooks. Letter B is written about the quote.

There are about 13 other trees covering the bottom third of the page. They are not evenly spaced, seeming to represent a partially wooded area. They are somewhat lightly sketched.

On left bottom corner of page: “Letter B. These prisoners of general Burgoyne’s army spend their life in this village, that some lazy people do in a market, that stand gazing about them without buying or selling. They slipped their opportunity–and if opportunities be not catched in the very nick they are irrecoverably lost.

Click this link for much more information on Camp Security–all my posts and columns.

To learn more about Camp Security, the prisoners and the local militia guards, as well as how to help permanently preserve this important site, click on this link for the Friends of Camp Security website.