Sergeant Lamb at Camp Security–Part One 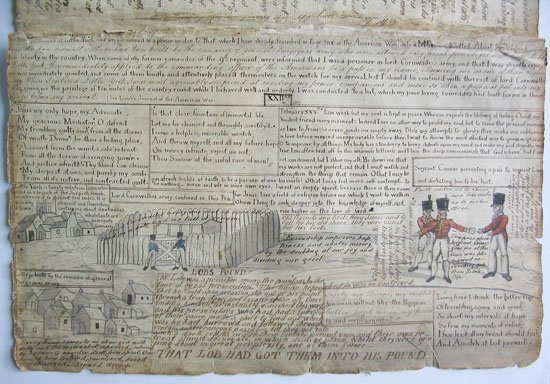 “[The troops] arrived at Little York and were confined in a prison similar to that which I have already described in Page 208 of the American War, only a little more [limited] About [200 yards] from this pen a small village had been built for the remains of general Burgoyne’s army, who were allowed very great privileges with [respect to their] liberty in the country. When some of my former comrades of the 9th regiment, were informed that I was a prisoner in lord Cornwallis’s army, and that I was shortly expected [at] Little York, they immediately applied to the commanding officer of the Americans for a pass in my name, claiming me as one of their regiment. [It] was immediately granted, and some of them kindly and attentively placed themselves on the watch for my arrival, lest I should be confined with the rest of lord Cornwallis’s [army]. When I entered Little York I was most agreeable surprised at meeting my former companions and more so when a pass was put into my hands, giving me the privilege of ten miles of the country round when I behaved well and orderly. I was conducted to a hut, which my poor loving comrades had built for me in their days before my arrival. (See Lamb ‘s Journal of the American War”
———————————–

The drawing on left side of page is of group of houses and a square church tower. It seems to go with: “Little York is twenty miles from Lancaster situated on a branch of the Susquehannah, from whence it is distant ten miles. It is an exceeding pleasant and flourishing little town containing about 600 houses, inhabitants are principally Germans.”

A drawing of a stockade adjacent to the above is labeled “Lord Cornwallis’s army confined in this Pen.” The stockade has a long building, probably barracks, inside it. It is guarded by two soldiers at the gate. Written across the stakes is “Lord Cornwallis army was shut up here like toad in a hole and as full of venom.”

At the far right there is a drawing for three soldiers in British uniforms. The one in the middle is handing a paper to the one on the right. The title in the block above is “Serjeant Connor presenting a pass to Serjeant Lamb and directing him to his hut.” Writings around the drawings say: “Faith unites to Christ, and love unites us to our brethren.”
Also “This pass which Serjeant Connor gave me at this time was like a sweet refreshing gale from Zion’s top].

On the bottom left corner of the sheet is a group of houses. The label above the drawing reads: “Village built by the remains of general Burgoyne’s army.” The paragraph below the village drawing reads “Every hour comes to us charged with duty and the moment that it is passed, returns to heaven to register itself, how spent. Our hours how trifled, how sauntered, dozed [?]–sinned away.”

Click this link for much more information on Camp Security–all my posts and columns.

To learn more about Camp Security, the prisoners and the local militia guards, as well as how to help permanently preserve this important site, click on this link for the Friends of Camp Security website.