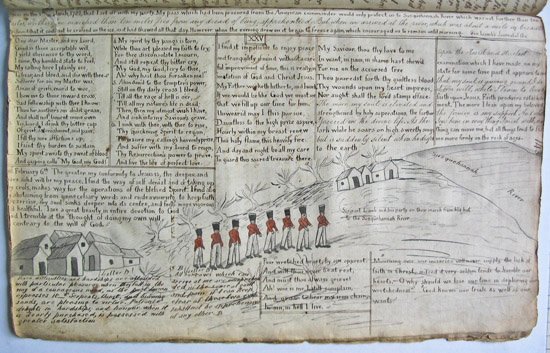 The drawing above is the fourth in a series of four color drawings attributed to Sergeant Roger Lamb of the Royal Welsh Fusiliers (23rd Regiment of Foot). He was captured with the army of Lord Cornwallis at Yorktown, Virginia in October, 1781 and sent with many of the prisoners to Camp Security here in York County. This link will take you to my posts on the first three drawings.

Lamb had first been captured with General Burgoyne as part of the 9th Regiment of Foot at Saratoga, New York in October 1777 and detained as part of the Convention Troops. He managed to eventually escape and found his way to the British lines. In the intervening years he had been captured and escaped two more times, making the escape he was plotting from Camp Security his fourth.

The records of the day being very sketchy and not including data bases, officials at Camp Security had no way of knowing Lamb’s escape tendencies. Upon arrival at York, instead of being confined with the rest of the Yorktown, Virginia prisoners in the stockade, Lamb joined his former comrades from the Convention Troops. Like them, he was allowed to live in a village of huts and allowed the freedom of a ten mile radius of Camp Security.

The text accompanying the drawings is nearly identical to Lamb’s 1809 memoir A Journal of Occurrences during the Late American War. Copies of the drawings were found last year at the British National Army Museum and permission was obtained to share them. Follow this link to the first three.

Much of the text on the pages has unrelated religious content, which I have not transcribed, but anything relevant to Camp Security on the fourth drawing is transcribed below:

“It was the 1st of March 1783, that I set off with my party. My pass which had been procured from the American commander would only protect us to Susquehannah River which was not further than ten miles; we therefore marched those ten miles free from any dread of being apprehended. But when we arrived at the river, which was about a mile in breadth, we found that it could not be crossed on the ice, as it had thawed all that day. However when the evening drew on it began to freeze again, which encouraged us to remain until morning. See Lamb’s Journal of the [American War].”

The drawing starts at bottom left and continues across the page. It shows a group of huts and then a line of trees going upgrade to a cluster of three small houses, which he shows near to the “Susquehannah River.” Eight British soldiers are shown between the two groups of houses.
The caption reads: “Serjeant Lamb and his party on their march from his hut to the Susquehannah River.”

The Susquehanna did freeze enough to allow Lamb and his friends to cross the next day. After three weeks of adventures described in his memoirs, Lamb made it to the safety of British-held New York. When the war ended in 1783, he returned to his native Ireland.

This link will take you to all my Camp Security posts.

To find out more about Camp Security and to make a donation to help secure this important site go to campsecurity.com.