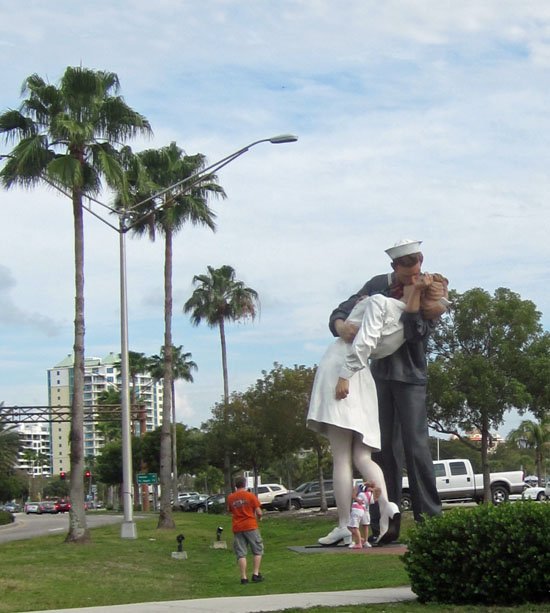 I have to stretch the York County, Pa. history connection a bit for this post, but I can do it. First, in one of my recent posts on the York County World War II USO, I mentioned that my former neighbor, Muriel Smith, who was one of the local USO hostesses, related that she and a friend happened to be in Times Square when photographer Alfred Eisenstaedt recorded the V-J Day kiss made famous in Life magazine. The 26 feet tall sculpture above is said to have been based on that photo. New Jersey based sculptor J. Seward Johnson has said that it was instead modeled after a similar photo of the same incident taken by another photographer. (Copyright issues seem to be still in play.)

In a broader sense, York County certainly played a large role in World War II, sending many men and women to the armed forces, and switching from civilian to military manufactured products, giving name to the nationally recognized efficient York Plan. Besides, a York countian (me) just took the photo above in Sarasota, Florida last week.

According to news reports today, one of several veterans who claimed to be the sailor in the photo died today. He was not the same veteran that made the news last fall when a sailor and a nurse reunited at the Sarasota statue.

The statue itself has an interesting past. The plaque beside it describes the celebration in Times Square and how it came to be installed it Sarasota. It reads, in part:

This celebrated moment in the history of our nation prompted preeminent American sculptor J. Seward Johnson to create this sculpture, which he named “Unconditional Surrender.” After several years of intensive efforts, a proud veteran of World War II, Jack Curran, bought the sculpture, and with the outstanding support given by various Sarasota County veterans’ organizations, he was able to donate the sculpture to the City of Sarasota.

The presence of this sculpture prompts viewers to never forget the “Greatest Generation” or the day when they demonstrated their “Unity”—August 14, 1945.

It hasn’t been quite that simple. There was much objection to the placement of the 26 feet tall statue on the Sarasota waterfront when it was installed in 2005, and it was later moved to San Diego. It wasn’t universally welcomed in San Diego either, and evidently a good many of the Sarasota fans wanted it back.

They didn’t, however, get the original fiberglass sculpture back. The current one is Sarasota is aluminum, and is said to be more hurricane-resistant, although it had to go back to New Jersey for seven months to be repaired in 2012 after a car ran into it. San Diego also has one again, this time cast in bronze. According to a news article from a year ago, the fiberglass version was taken back to New Jersey to be restored. I haven’t come across any articles yet to see if that one has been reinstalled anywhere.

A Google search shows that controversy about the statue still simmers. True art or a very large conversation piece, it has certainly generated a lot of conversation on both coasts.