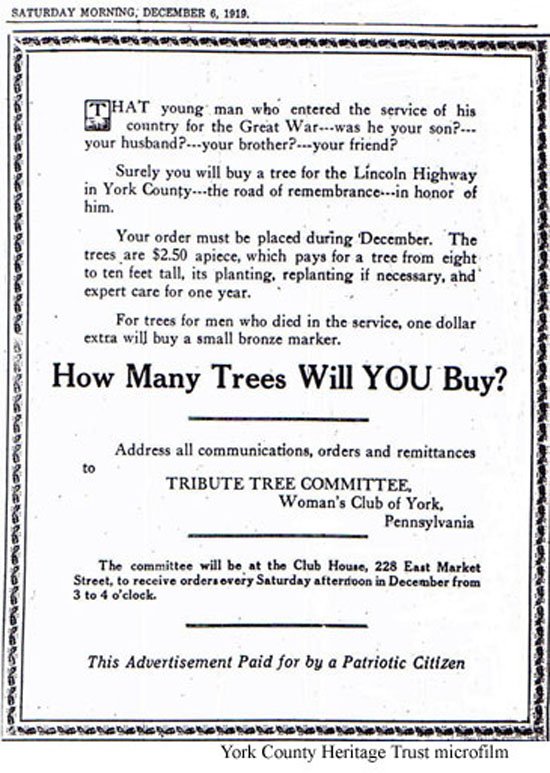 The Tribute Tree Committee appealed to the patriotism and generosity of York County citizens in this December 1919 York Gazette ad. A neighbor recently asked if I knew anything about the rows of sycamore trees still standing in places on the Susquehanna Trail south of York. She had heard that they were some kind of War Memorial.
Research led me to an extensive file at the York County Heritage Trust Library/Archives. The file contained only a few articles on the Susquehanna Trail sycamores, which were indeed planted as a World War I memorial by the War Mothers organization. The rest of the file was a treasure-trove of information on the York County component of a similar World War I memorial project to line the Lincoln Highway from coast to coast with trees.
The file includes original records, donated around fifty years ago by the Woman’s Club of York, of the Road of Remembrance from Abbottstown to Wrightsville. Records of contributions collected by the very organized group of women are included, as are file cards for each serviceman memorialized. For example:
NAME: William John Feldman
RESIDENCE: 404 W. Market St., York
DEPT OF SERVICE: Artillery
RANK: Private
WHERE DIED: Contrexeville, France.
A number in pencil (S-141) probably refers to the original location of the tree planted in memory of Feldman.
Click here for a previous post on the Woman’s Club, sponsors of the memorial tree project.
Why isn’t the Lincoln Highway across the county today an avenue lined with these trees? One reason is probably that instead of the visually distinctive sycamores planted along the Susquehanna Trail, four varieties of trees (oak, sugar maple, elm, and tulip poplar) were planted. These common trees would have blended in more quickly, with their purpose forgotten as memories faded.
The other reason for the Lincoln Highway trees disappearing is quite evident–progress.
The story of the ambitious project itself is absorbing. The full column telling that story follows:

Shortly after the World War I ended, a grand plan was conceived to create a giant living tribute to the men (and far fewer women) who had served, especially remembering those who had died. Orderly rows of trees would stretch along the Lincoln Highway from San Francisco to New York.
The Woman’s Club of York, under the direction of Mrs. John B. (Minnie) Hamme, took on the project in York County. The trees would be planted on both sides of the road, staggered 100 feet apart. The task was daunting– already in 1919 traffic was increasing on the Lincoln Highway. The state Department of Transportation recommended that the trees be planted inside the fences that divided the right of way from private property. This meant that the women had to secure the rights to plant the trees from every property owner along the way.
The public was asked for $2.50 to sponsor a tree and an additional dollar for a small engraved bronze shield to mark a tree as a memorial for one of the 220 York countians who had died in the war. The tactic, and an appeal to patriotism, worked. The York Gazette published a list of hundreds of donors by May 1920. Contributions rolled in from businesses and factories, service organizations and clubs, churches, schools, and individuals. Some manufacturers, such as S. Morgan Smith with 70 trees, sponsored a tree for each worker who had served. The Yoe Red Cross Society funded three memorial trees for the three men from Yoe who had perished. Donations from Windsor included $3.50 from Eisenlohr’s [Cigar] Factory, $3.50 from Beulah Warner as a memorial for her husband Clayton Warner, and $2.50 from the Girl Scouts.
Trees were chosen with a long life expectancy: sugar maple, elm, tulip poplar, and oak. The first tree was ceremoniously planted November 2, 1919 in remembrance of Michael Gardner, the first fatal casualty from York County in the war. It was planted on the Cannon property near Stony Brook.
The B. F. Barr nursery from Lancaster contracted to supply and plant the trees for $2.50 each, including digging holes two feet wide and deep, with dynamite if necessary; watering; and cultivating during the first season. Barr would replace any tree that perished in its first year.
Figures vary, but about 1,500 trees were planted during 1920, from York to Wrightsville in the spring and York to Abbottstown in the fall. York City and boroughs along the way were skipped, probably because there would have been nowhere to put the trees in most cases. Permission was obtained from most property owners. Some, such as developer Charles Kurtz, reserved the right to move the trees when the property was developed.
More funds were contributed for two large monuments to be placed along the highway at each side of the county, one in Wrightsville and one in Abbottstown. Two cast bronze tablets were purchased for $215 from the Cincinnati Mfg. Co. Each read “LEST WE FORGET, THIS HIGHWAY FOR TWENTY FIVE MILES EASTWARD [OR WESTWARD] ACROSS YORK COUNTY WAS PLANTED WITH TREES BY THE PEOPLE OF YORK COUNTY AND DEDICATED BY THEM TO BE FOREVER A ROAD OF REMEMBRANCE IN HONOR OF THEIR SONS AND DAUGHTERS WHO SERVED IN THE WORLD WAR 1917-1918.” The five-feet-high granite monuments on which they were mounted were supplied by B. W. Birchall & Sons, York for $280. They were dedicated with fitting ceremonies on Memorial Day, May 30, 1922; Wrightsville at 10:30 a.m. and Abbottstown 4:30 p.m. A letter of support was read from Florence Harding, wife of the President, one of the instigators of the project.
The trees were too small to mark individually, so the state highway department numbered fences and telegraph poles. The newspapers published meticulous lists of which trees were planted where in honor of whom, so donors and family could identify “their” tree.
The story doesn’t end there. Many of the young, fragile trees didn’t survive. The Barr nursery stood by their first year guarantee, but by 1925 replacement funds were depleted. That year the women asked for, and received, 275 replacement trees through Governor Pinchot and the state Department of Forestry. The American elms initially survived best, but no one could foresee the scourge of Dutch elm disease in the next decade. Progress seemed to deal the biggest blow. Land was soon developed and the Lincoln Highway was widened more than anticipated in 1920. In 1953, a newspaper article estimated that only a few hundred of the trees remained. There are undoubtedly fewer by far today. At least one of the granite and bronze monuments remains as a lasting tribute to those long ago veterans.
If anyone knows where there are still some of these 1920s memorial and tribute trees, please share that information.