Remember your letters to Santa? 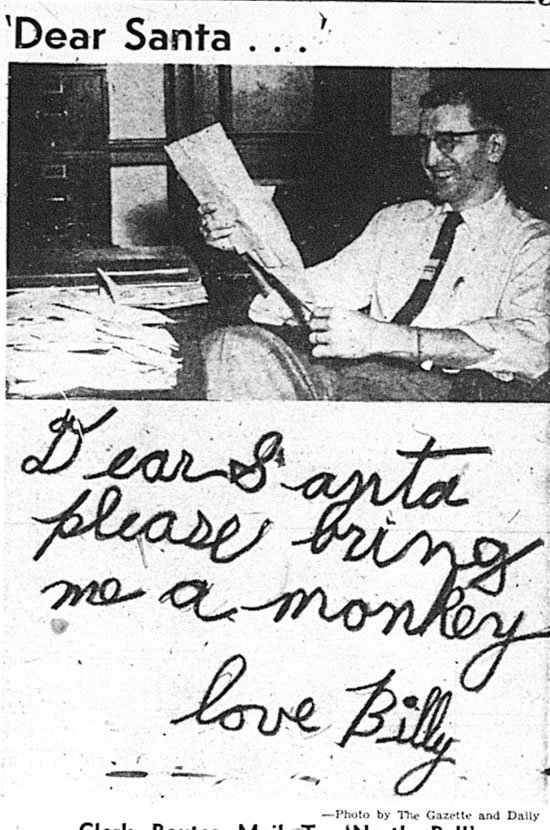 Do many children still write letters to Santa? According to this article from the December 15, 1956 Gazette and Daily, the post office was inundated with them then.

Billy, the writer who wanted a monkey, must be about retirement age by now. I wonder if he is still looking for Santa to bring his monkey. The account reads:

The annual flood of Santa Claus letters, confidently addressed to ‘The North Pole” (of even “The North Poll” is beginning to hit York post office.

In charge of receiving them this year is Charles H. Howard, Jr., postal clerk, who’s shown sorting through an accumulation of about 350.

Unlike their elders who often write at length, the youngsters kept their letters short and to the point. The typical writer covered three subjects: (1) how good he’s been this year (2) what he wants for Christmas (this section, alas, is not always so brief) and (3) a request to Santa to remember Mom and Dad or brothers and sisters.

One chap, shunning this detail, wrote with great clarity and brevity: “Dear Santa, Please bring me a monkey. Love, Billy.”

Another, evidently counting on the value of complete frankness, put it this way: “I have been a good girl sometimes, and sometimes I’ve been a bad girl, but I’ll try to be a good girl until Christmas.”

The problems involved in Santa’s colossal task of delivering gifts to so many children all over the world in a single night impressed many. “Santa, I hope you do not get too tired,” wrote one sympathetic petitioner. Another, with a more practical problem in mind told Santa: “I hope you can get down our chimney easily.”

Just for the record: When Howard was asked if all these letters will be forwarded to the North Pole, he replied without a trace of a smile: “Absolutely.”

The links below will take you to my other recent posts from Christmas season 1956:

Exodus to the shopping center.