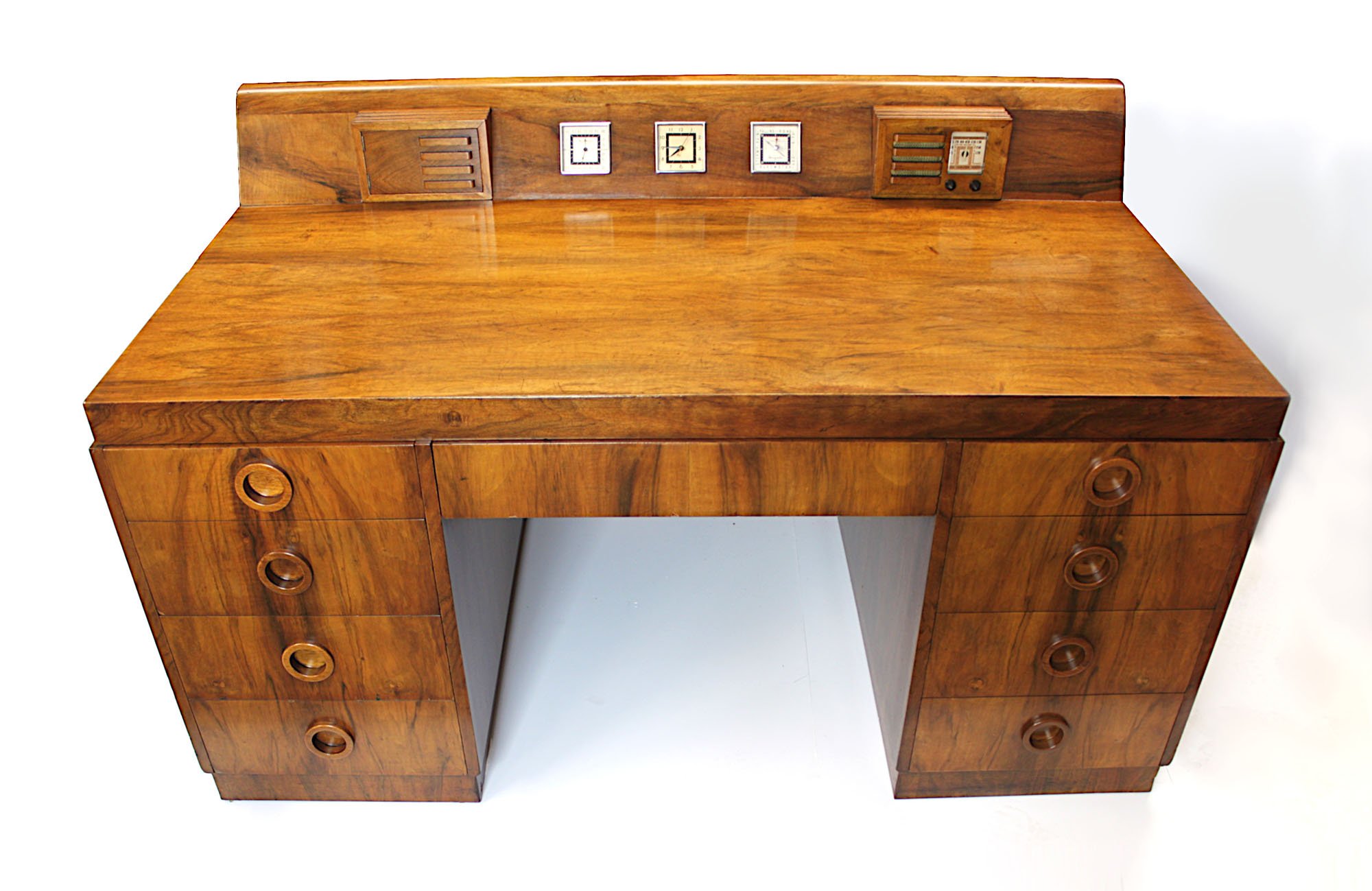 Some of us can remember when the big furniture factories in Red Lion were in full production.  Local workers crafted fine furniture shipped around the country and perhaps beyond.  A couple of weeks ago, while I was writing my recent York Sunday News column, I saw a news item that a current furniture manufacturer, the Kimball- David Edward company, was shutting down its plant at 252 North Franklin Street in Red Lion.  The building is currently for sale. Ironically, that column, transcribed below, was all about a desk made in that very plant in 1939 for the New York World’s Fair.

Several months ago I was contacted by Sam PeGan of Indiana.  He was doing research on a Streamline Moderne style desk he was planning to sell online.  He mailed photos, and it is quite a desk.  The back of the beautiful walnut desk resembles a dashboard with three instruments: a clock, a thermometer, and a barometer.  These are flanked by a Philco Transitone radio and a small compartment, perhaps for important papers.

The interior of one of the larger desk drawers has about a third of a decal left.  The name of the company is missing, but there was a clear image of the face of a red lion.  His research led to my 1913 column on the Red Lion Cabinet Company.  It turns out the logo is not that of the cabinet company, but of the Red Lion Table Company.  Both of these companies are among a handful of furniture manufacturers organized in Red Lion in the first few decades of the 20th century by essential the same group of local men.

The story of the desk gets even better.  PeGan generously shared further research and links that revealed that the desk was designed by Count Alexis de Sakhnoffsky, who has been called the “master of streamlining.”  Four furniture manufacturers: Heywood-Wakefield,  Simmons Company,  Red Lion Furniture Company and Red Lion Table Company co-operated in retaining de Sakhnoffsky, chiefly well known as an industrial designer, to create something new for the 1939 World’s Fair House of Tomorrow.

Various periodicals of the day describe the furnishings, such as a revolving bookcase built into the wall so that it could be accessed from the living room or bedroom and a legless dining room table “suspended from the ceiling by a luminous glass tube.”  The bedroom suite, which seems to have been a product of the Red Lion Furniture Company, featured twin beds with built-in reading lights, bookshelves and drawer. The striking “dashboard” desk is described in detail in the articles.

PeGan only knows of a few other examples of the desk, so production might have been quite limited.  Sets of the “House of Tomorrow” furniture were also displayed at other places during the World Fair’s run of April 30, 1939 to October 27, 1940.  They were set up at Bloomingdale’s Department Store in New York that summer, and the August 1, 1939 Pittsburgh Post-Gazette ran a full page ad: “Horne’s presents The House of Tomorrow designed by Count Alexis de Sakhnoffsky,” mentioning that the designer would be at the department store that day, happy to discuss modern design with visitors. The newspaper followed up the next day with an interview with de Sakhnoffsky and a photo of him sitting on the “dashboard” desk.

The September 28, 1939 Detroit Free Press ran an article “For the Modern Business Man.”  It featured two desks, one was by Frank Lloyd Wright and the other was the Red Lion Table Company “dashboard desk” by de Sakhnoffsky.  That December, a column in the Uniontown, Pa. Morning Herald suggested an array of large and small Christmas gifts available in Uniontown. They range from bath salts and pottery to a marabou jacket (fluffy feathers) to “a luxurious gift” for a business man—our desk. Perhaps the star of the “House of Tomorrow,” the desk appeared in the leading magazines in 1939, including Esquire, Popular Science, Look, and Woodworker.

De Sakhnoffsky was at the height of his fame in 1939.  He was born in in 1901 in Kiev, Russia.  to a personal advisor to Czar Nicholas II.  His mother was from a very wealthy family.  In 1920, after the Russian Revolution, young Alexis fled with very little money.  An aunt paid for his engineering studies in Switzerland, and then he moved to Belgium to study design.  His talent led to a job designing custom cars. He won Monaco Grand Prix medallions for auto design for five straight years, and was recruited by American auto body companies.  After de Sakhnoffsky’s arrival in America around 1929, he created his innovative streamlined bodies for many American auto and truck makers, including Chrysler, Ford, Mack, White, Nash, Packard, Willys-Overland, Crosley, and Studebaker.  His futuristic car designs populated the pages of Esquire magazine during the 1930s.  De Sakhnoffsky designed Gruen watchers, Emerson radios, Murry bikes, refrigerators, boats, airplanes, toys and cookware—the list is practically endless, and he held 38 U.S. patents.

Having become a U.S. citizen in 1939. de Sakhnoffsky served in the Air Force Combat Intelligence Corps during World War II, including two years in Russia from 1943-1945.  After the war, de Sakhnoffsky continued designing and writing, mostly focusing on cars.  He died in Atlanta in 1964.

I found only a few references to the Red Lion made furniture for the 1939 World’s Fair display in local newspapers.  They are buried in the Red Lion news items, probably read only by people in the Red Lion area.  The Gazette and Daily of August 7, 1939 relates that the house of glass at the New York Fair contains a bedroom suite made by the Red Lion Furniture Company.  Another brief Red Lion news entry on September 29, 1939 said that the suite, designed by Count de Sakhnoffsky, would be displayed in the window of the Zarfos Furniture store for the next week.  I do not know if an example of the Red Lion Table Company “dashboard desk” was included in the Zarfos display.

Although Red Lion furniture companies maintained showrooms in cities such as New York, Philadelphia, San Francisco and Los Angeles, most of the York County people just took/take local industries for granted, although products were/are known worldwide.  Ironically, many years ago I lived just a few doors from the Red Lion Table Company, and one of my uncles worked there for years.  I like to think that maybe he had a hand in creating the unique desk.

The Red Lion Table Company was organized in 1913. The first officers were S.S. Sechrist, C.F. Zarfos, and C.S. Lamotte.  They manufacture not just tables, but other wooden furniture, such as bedroom and dining room suites.  By 1930 they employed 75-100 men.  They closed in the early 1980s and the building and equipment were auctioned off to David Edward.

Pegan has restored the desk and it is currently for sale online. 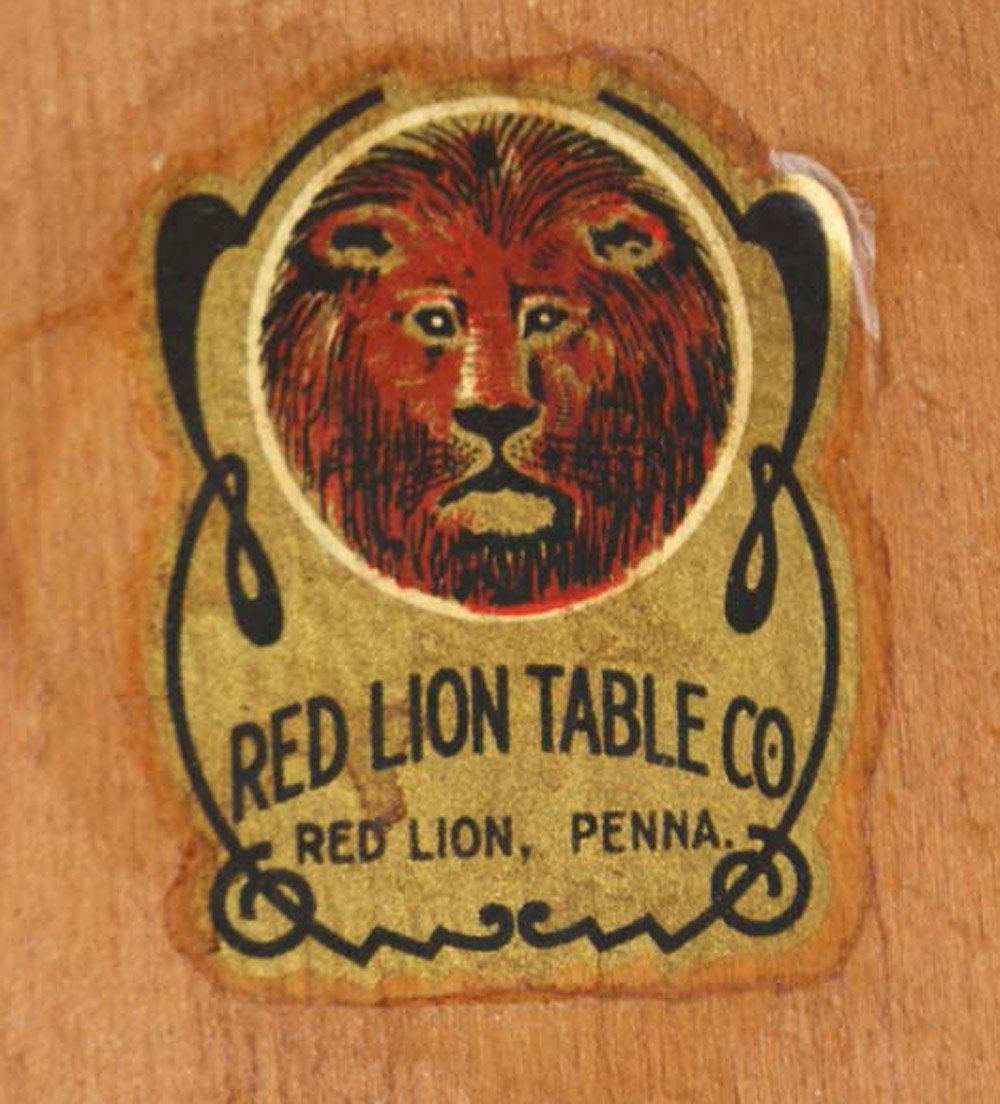