As I mentioned in my recent York Sunday News column, from 1942 to 1945 the Red Lion Cabinet Company was dedicated to making products for the military, working with other companies as part of the York Plan, a locally initiated system of wartime manufacturing cooperation that became a national model. Here is a little more detail on some of those items along with some photos.

Some were small, such as the bomb fuses, which the Cabinet Company turned out at a rate of 40,000 a month and some were large, such as the sled toboggans. The company even had a hand in one of the biggest of all World War II era objects, the huge Mars flying boat built by the Glenn L. Martin Aviation Company of Baltimore. As described by Stephen Sechrist, one of the owners of the Cabinet Company, the company made forms out of very hard laminated Masonite type board. These forms were used by the Martin Company to stamp out metal parts for the Mars flying boat. These massive aircraft, which could land and take off on water, were used to transport troops and supplies. They were later used, and still might be in some cases, in firefighting to dump copious amounts of water on forest and brush fires.

They worked in whatever material the military needed–wood, metal and even fabric. The Red Lion Cabinet Company had a contract to make window sections for tents. Some sewing was involved, so they set up a sewing department in one plant that employed several hundred women.

Plywood pack boards were designed to reduce strain and chafing on the soldiers’ backs. Duck boards were used to walk on in wet conditions and could be used to bridge small streams. They also made the supports and bridging for pontoon bridges, which could be crossed by tanks as well as infantry.


Some of the items were utilitarian boxes, such as those for walkie-talkies and spare parts, and the pioneer chests, which were big olive drab painted chests with handles. Some boxes were more elegant, such as the cylindrical binnacle stands made for the U.S. Navy to house the ship’s compass and square mahogany cases with brass inlay manufactured to house chronometers made by the Hamilton Watch Company. These last two items were extremely important to keep a ship both on time and on course. 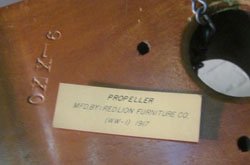 One of the most intriguing Red Lion Cabinet Company related wartime items at the Red Lion Area Historical Society Center Square Museum isn’t from World War II or the era of later defense items made by the Redco division. It is a beautiful laminated wooden airplane propeller made by the Red Lion Furniture Company, which had the same owners as the slightly later Cabinet Company. The label reads: “Propeller Mfd. by Red Lion Furniture Company (World War I) 1917.”

Most of the items above can be seen at the Red Lion Area Historical Society Center Square Museum, which is open from 2 p.m. to 4 p.m. Sundays or by appointment. A Red Lion Cabinet Company packboard is also included in the York Plan exhibit at the Agricultural and Industrial Museum of York County Heritage Trust. AIM is open from Tuesday through Saturday from 9 a.m. to 5 p.m.

This link will take you to some photos of Red Lion Cabinet Company’s radio and television cabinets.