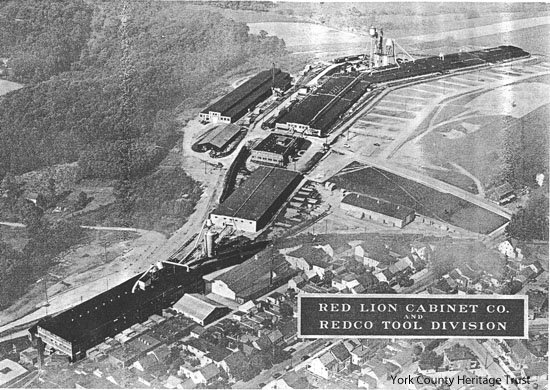 I came across the booklet above while doing some research on the Red Lion Cabinet Company. It is undated, but was allegedly done around 1953, when the company was nearing its peak production, with 10 % of the entire wooden television cabinet market.

The list of statistics on the first page really drove home the inflation we have witnessed during the past 60 years. It gives weekly data for when the RLCC plants were running at full capacity:

Allowing for supervisors earning a little more, that comes out to the production worker averaging about $60.50 a week, or $1.51 an hour for a 40 hour week. Even though those wages make us shake our heads today, it turns out that wasn’t too bad. “Average hourly earnings of production and nonsupervisory employees” was in the $1.50 to $1.60 range during 1952, according to month by month statistics from January 1, 1939 to September 1, 2013, compiled by the Federal Reserve Bank of St. Louis and available on their website.

Minimum wage was $.75 an hour in 1953, so the workers at Red Lion Cabinet Company were doing o.k. One thing I noticed that changed for the better is the telephone bill. Can you imagine what a business would be paying in today’s dollars for an equivalent of that $225 telephone bill?