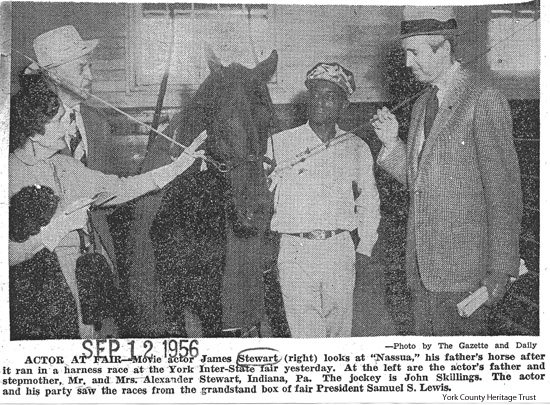 I know it’s not York Fair season, but we’re just coming out of Jimmy Stewart (It’s a Wonderful Life) season, so this blog is somewhat timely.

Years ago, probably when the Gazette and Daily became the York Daily Record, their mid-20th century clipping files were donated to the Historical Society of York County (now York County Heritage Trust) Library/Archives. Newsprint deteriorates over the years, so volunteers have been conducting an ongoing project of photocopying the clippings. YCHT Director of Library and Archives, Lila Fourhman-Shaull shared some newly-copied G&D clippings about Stewart’s visit to the York Fair in 1956.

Jimmy Stewart, who the newspaper refers to more formally as James, wasn’t here to do a show. He was here to see the harness races with his father and step-mother, Mr. and Mrs. Alexander Stewart of Indiana, Pa. The elder Stewart was the owner of one of the race horses. The Stewarts watched the races from the private grandstand box of Samuel S. Lewis, fair president and general manager.

There are some other local connections mentioned in the clippings. Stewart was picked up at the airport by his uncle, Harrisburg Attorney Sterling McNees. He was also reunited with his Mercersburg Academy roommate of 30 years before, William B. Stock. The party was treated to lunch at the Hotel Yorktowne by local real estate man D. W. Detwiler since “the Detwilers and elder Stewarts have nearby cabins in Florida.”

Since it sometimes seems that just about everyone has some York County roots, I did a quick internet search. It would take more research to prove it, but it looks like his Stewart ancestors might have settled in Adams County in the 18th century, when it was still part of York County. A great-great grandmother may have been one of the Gettysburg Gettys.

Another road leading back to York County.