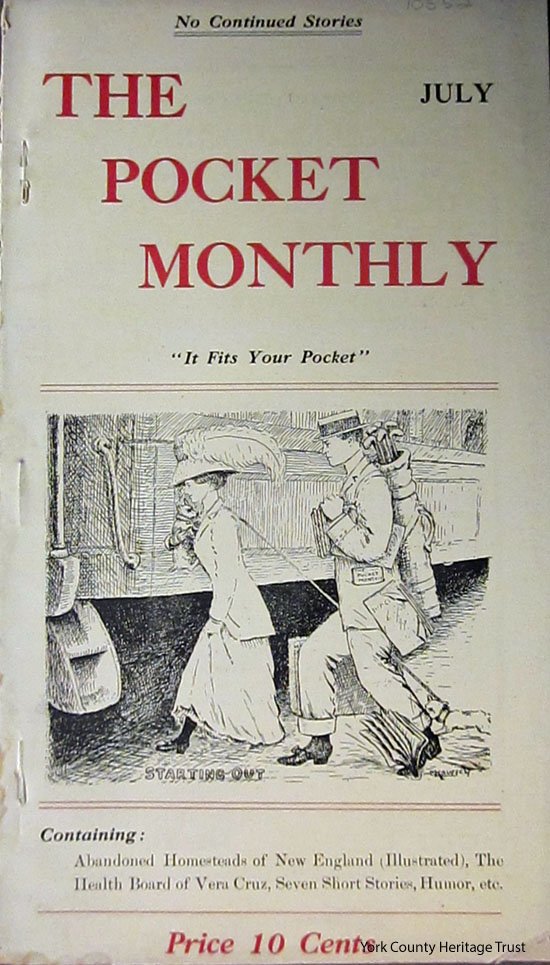 Long before there was the internet, television, movies, and even radio, people liked to be entertained. You couldn’t go to the theater or circus or a ball game all that often, so you read.

Literary magazines were very popular in the late 19th and early 20th centuries. York County Heritage Trust has copies of what might be the complete run of The Pocket Monthly. The five issues have a York imprint and were printed on the Wrightsville Star press. A contemporary newspaper clipping, dated July 16, 1909, describes the new magazine:

The July number, which is also the first number, of the Pocket Magazine, the latest thing in the short story and illustrated article magazine world, is just out. Most of the mechanical work of the publication was done in the Star office in this place and this should induce local people to read it. It is an attractive publication and has several features which should gain it popular favor.

The magazine does not and will not contain any continued stories or articles. It is made just wide enough to slip easily into a man’s sack coat pocket, without bending, and is the only short story publication in the United States with this attractive feature—a feature which will undoubtedly appeal to everybody. The editors are selecting the very best stories from thousands submitted by writers from every corner of the globe and are going to publish specially prepared and selected articles of unusual interest and benefit to those who desire to be acquainted with the world’s affairs.

The first issue contains an illustrated article on “Abandoned Homesteads of New England” by Bradlee Williams, another entitled, “The Health Board of Vera Cruz,” as well as seven interesting short stories, humor, verse, etc.

In the August issue one of the strongest financial articles ever written will be published. It gives some of Wall Street’s unwritten history and is entitled “The Keene-Harriman War and the Cause of the Panic of 1907.” This is the first article published to show conclusively who is responsible for the terrible panic which has killed business and starved families for almost two years. The author is A.N. Ridgley, a financial forecaster and one of the leading writers on financial subjects in the country. The magazine sells for ten cents per copy of $1.00 per year.

If you live here buy it from local merchants who are selling it and if you live elsewhere send ten cents for sample copy to The Pocket Magazine Co., York, Pa.