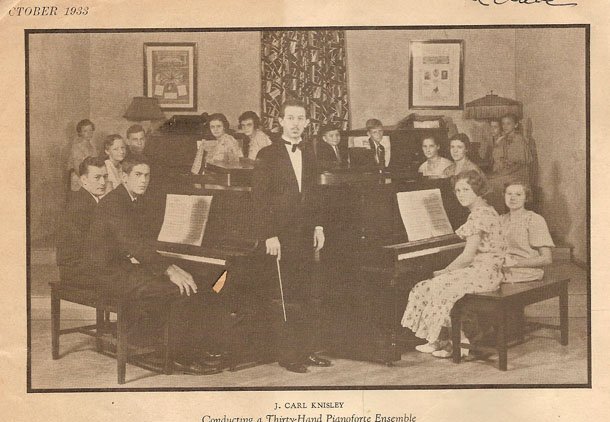 In my recent York Sunday News article on the history of the Weaver Organ and Piano Company, I invited people to share any memories connected with Weaver.  A couple of responses were from individuals who fondly remembered playing in recitals at the Weaver studios in the factory complex.

Dorothy Johns Gard was a student of York area music teacher J. Carl Knisley. He lived in Wrightsville and had a studio on Beaver Street in York, so he drew from a fairly wide area.  Dorothy was a teenager from Columbia, as were the Leedy twins, and all three played in the Professor Knisley’s recitals that showcased his best students.  Those recitals were sometimes put on in the Weaver studios.  Dorothy believes the photo above showing 15 students ready to play on eight pianos was at Weaver.  It is the

The photo below is from the March 1934 Weaver Piano News.

The lengthy caption of the article reads:

KNISLEY 8 PIANO ENSEMBLE AS IT APPEARED IN CONCERT DECEMBER 2, 1933

AN EDITORIAL IN THE YORK GAZETTE DECEMBER 4, STATES THAT NEVER HAS FINER PIANO TONE COME FROM THE STAGE OF YORK HIGH SCHOOL.

WHAT DOES MUSIC MEAN TO THESE SIXTEEN MUSICIANS AND ARTISTS AND WHAT COULD IT MEAN TO THOUSANDS OF OTHERS?

AUDIENCE OF 1200 HEAR MOST UNIQUE PROGRAM BY 13 STUDENT PIANISTS AND VOCAL ARTIST.

The commentary goes on to say that Professor Knisley “furnished York music lovers with a real thrill” with the eight piano ensemble featuring 13 of his most advanced students.  The York Dispatch extolled it as one of the best of many brilliant musical events that had been held in the William Penn High School auditorium.  The night also featured solos by soprano Margaret Troutwine and talks on music by James F. Cooke, well known Philadelphia pianist, composer and writer on music, and Dr. S. Becker Von Grabill, acclaimed pianist Lancaster County and descendant of Polish royalty.

Dorothy is fourth from left on the William Penn stage. The article also mentions that most of the piano students who performed were also popular individually, appearing at private concerts and on the radio.

I really appreciate hearing from persons who participated in York County’s musical heritage, in this case involving both the performers and the locally crafted instruments.  I must confess to not being very musical myself, but I do like to hear a good pianist and cannot image the cascade of sound created by 32 hands playing together.