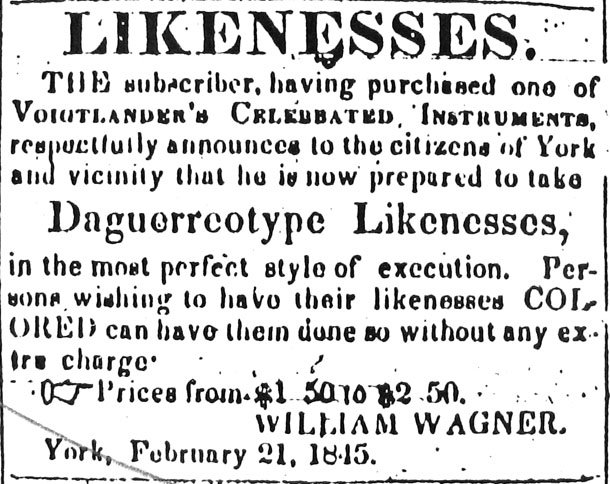 In 1826 Frenchman Joseph Nicéphore Niépce (1765-1833) created the first real photograph known to exist today. The view from a window at Gras, France is also known as the “First Photograph,” and it is in the photography collection at the Harry Ransom Center at the University of Texas at Austin. Niepce’s process was known as heliography, with the image produced on a plate of pewter. His accomplishment was overshadowed at the end of the next decade when fellow Frenchman Louis-Jacques-Mandé Daguerre (1787–1851), with whom he had partnered, introduced the Daguerreotype. Dauguerre’s process, announced in 1839, produced a sharp image on a polished silver plated copper sheet and quickly spread throughout the world.

As a young man York native William Wagner (1800-1869) was druggist and printer, and then he became nationally known as an engraver and a prolific creator of seals for businesses and government entities. He had a long career as Cashier at the York County National Bank and served as the Chief Burgess of York (similar to Mayor). Wagner was also, as far as I know, the first resident photographer in York County.

LIKENESSES. THE subscriber, having purchased one of VOIGTLANDER’S CELEBRATED INSTRUMENTS, respectfully announces to the citizens of York and vicinity that he is now prepared to take Daguerreotype Likenesses, in the most perfect style of execution. Persons wishing to have their likenesses COLORED can have them done so without any extra charge. Prices from $1.50 to $2.50. WILLIAM WAGNER York, February 21, 1845.

Before long photographic studios were cropping up all over. Photographers in both York and Lancaster counties wooed prospective Wrightsville customers, as shown in two competing ads shown below, from the May 7, 1857 York County Star and Wrightsville Advertiser.

Dellinger and Metzgar of Columbia were eager to have customers cross the river to have their likenesses done:

The undersigned takes this opportunity of informing the citizens of Columbia and its vicinity, that he has purchased the Daguerreotype and Ambrotype Establishment, situated at the corner of Front and Locust Streets, Columbia, Pa. (well-known as SHEPARD & CO’S) where he is fully prepared to continue the business; and he hereby pledges himself to give entire satisfaction to all who may apply or no charges will be made.

I FLATTER myself that I will be able to afford entire satisfaction to all who require good pictures, as I have been in the business for the last six years, in Lancaster city; and my assistant, Mr. METZGAR, has had experience for 4 years and is fully competent to conduct the business. All who wish faithful and true likenesses of themselves or friends, will do well to call, as a better opportunity for securing the human face divine, has never been offered in this place. J. DELLINGER

And Glenalvin Goodridge of York stressed the quality of his work in an ad that have been running since 1854:

The best Daguerreotype Likenesses are TAKEN AT GOODRIDGE’S

A Question Asked and Answered. The question is frequently asked, “Who takes the best Likeness in York?” An answer is at hand.

GOODRIDGE, at his SKYLIGHT GALLERY IN GOODRIDGE’S BUILDING, opposite the Market House, YORK, Pa., takes the most LIFE-LIKE, Durable and Fine-toned Pictures that have ever been taken in that place.

He warrants satisfaction in all cases–and he takes them as well in cloudy as in clear weather.

I wonder what they would make of digital photography.