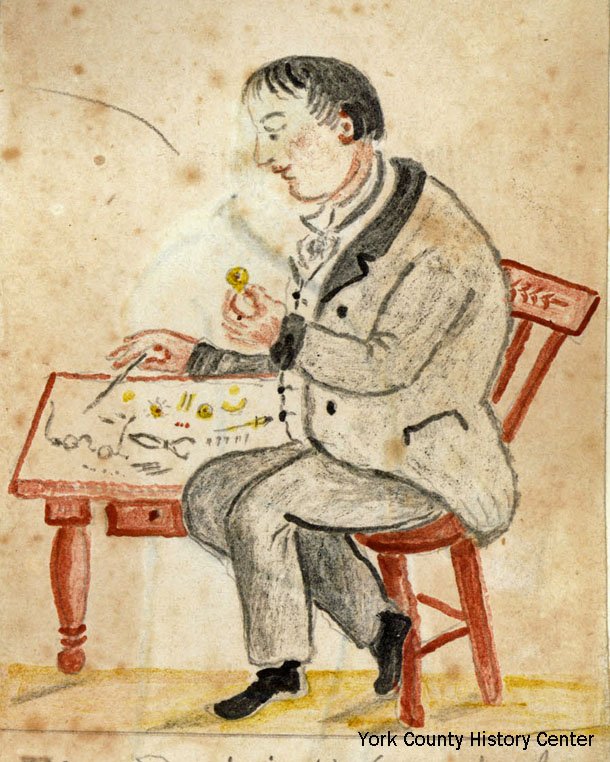 Phineas Davis was one of many York County inventors

York County seems to have had more than its share of inventors and innovators over the years. Quite a few of these ideas received patents from the U.S. Patent Office. I have written before about some of them. Here are a few: In 1881 H. M. Crider advertised his Patent Adjustable Fruit-Picker as the “best in the world.” Richard Sheppard of Hanover patented several fuel-injection pumps, used in his diesel engines, in the 1930s. Also in the 1930s, Lucy Neville Mitchell Smith, obtained a patent for the gorgeous strain of ornamental cherry tree she propagated.

John Elgar’s 1825 steamboat, the Codorus came out of the Webb, Davis and Gardner workshop. Phineas Davis, of that firm, is well known for his successful anthracite burning locomotive, named the York. Here is Davis’s story from my recent York Sunday News column:

What did York’s Phineas Davis contribute to commerce and transportation?

York County seems to have produced more than its share of innovators over the years. One outstanding example is Phineas Davis. His name is memorialized in a local school, but how much do we really know about this inventor and what he accomplished in the 40 short years of his life?

Quite a few inaccuracies can be found in articles about Davis. By going back to original sources, where possible, you can piece together Davis’s story. He is said to have been born near Grafton, New Hampshire around 1792. After his mother died, he made his way to York before 1810 and became apprenticed to clock and watch maker Jonathan Jessop. Articles say Davis made an exquisite small gold watch during that time, but I have not been able to verify its present existence.

He became interested in steam power. In 1825 the firm of Webb, Davis and Gartner built John Elgar’s Susquehanna, the first successful iron steamboat. According to its Annual Report, in January 1831 the Baltimore and Ohio Rail Road Company issued a challenge: “The Directors being desirous of procuring their steam machinery, as far as practicable, of American workmanship, and anxious to direct the mechanical genius of this country to its further improvement, offered a premium for the best constructed Locomotive Engine, which should be placed on the road on or before the 1st of June 1831, limiting the performance to a certain rate of speed and power of traction.”

The results are detailed on page 23 of the 1831 report: “In pursuance of the public call upon American genius … three locomotive steam Engines were produced upon the rail road, one only of which has been made to answer any good purpose. This Engine was built at York, Pennsylvania, by Phineas Davis, and after undergoing certain modifications, was found capable of conveying 15 tons 15 miles per hour, on a level. It has been employed on that part of the rail way between Baltimore and Ellicott’s Mills, and generally has performed the trip out to the Mills in an hour, with four cars, being a gross weight of about 14 tons.” The report goes on to give an explanation of how the engine operated and noted the fuel was anthracite coal. Various undocumented sources report Davis’s reward for winning the competition at $3,500 or $4,000, which would be around $110,000 today. The engine, named The York, went into operation on the B&O line, and Davis and Gartner built at least two more locomotives for the railroad in their York shop at the corner of King and Newberry streets. The first improved version, Atlantic, went into service in 1832 and may have been used in some capacity by the B&O until the 1890s.

Davis’s wife, Hannah Taylor, who he married at the York Meeting of Society of Friends in 1826, died around 1830. When he later took a job as superintendent in the B&O Mount Clare shops, Davis left their two young boys, Willis and Nathan, in the care of relatives of their mother. John Elgar had also been lured away from York to those shops.

Always improving each model, Davis finished his last locomotive for the Washington branch of the B&O in 1835. Shop employees celebrated its success on September 27th with an excursion to Washington and back. The train was made up of the locomotive, its tender, and several cars. Davis rode the tender to better observe operation of the engine on the return trip. A chain holding the rails on the track broke and a rail end caught one of the engine wheels, throwing it off the track. The cars in the rear crashed into the tender, smashing it into the engine and “dashed the tender in pieces.” Neither the engineers on the locomotive nor the passengers in the cars were injured, but Davis was killed instantly. An extremely lengthy obituary in the Baltimore Patriot extolled his accomplishments, praising him as a “mechanician” and as a person. It states that he was interred on the 28th at the Friends burying ground, Old Town.

The York papers ran the obituary word for word in their next edition. This led to some confusion, often repeated. Some readers missed “From the Baltimore Patriot” above the bolded “Death of Phineas Davis.” Since he was previously a member of the York Monthly Meeting, and they were reading the news in the York papers, they surmised that he was buried at the York meeting house on Philadelphia Street. Notes at the York County History Center files, taken from the Baltimore Monthly Meeting, verify that he was “Interred in the City Ground,” another name for the Quaker burying ground by the Baltimore meeting house at East Fayette and Asquith streets. It is not known if Davis ever had a gravestone, since Friends thought them a sign of vanity.

Google maps, with satellite and street views, is a great resource to see what is presently at historical sites. The Aisquith Street Meeting/Baltimore Meeting/Old Town Friends’ meeting house, built in 1781, still stands at McKim Park. The National Register of Historic places calls it one of Baltimore’s few remaining 18th century buildings and the oldest religious building in the city. The Old Town Friends Fellowship still might meet there, and it appears that they may share the building with the Freedom Missionary Community Church. (Map, satellite and street views are done at different times.) An interesting development is that a very large new Ronald McDonald House will be opening there in 2019. (The site is only about a half mile from the Johns Hopkins hospital complex.) The meeting house does not appear to be threatened, but I think it is likely that the new building covers at least a part of the old burying ground.

The Davis sons chose different paths during the Civil War. Willis was an engineer with the United States Navy, later entering the Confederate service. Nathan joined the Union Army, losing his life in a Virginia campaign. The fabled gold watch was said to be handed down to Willis. It is not known if either son left any descendants.

You can see a replica today of the diminutive York locomotive at the York County History Center’s Agricultural and Industrial Museum on West Princess Street, just a few blocks from where the original was conceived and fabricated.