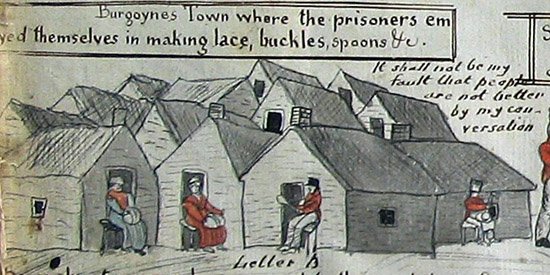 A few months ago I shared the information that a researcher at the British National Army Museum recently found color drawings, assumed to have been done by Sgt. Roger Lamb of the Royal Welsh Fusiliers, illustrating Camp Security and the escape of Lamb and his friends. These are the only known illustrations of Camp Security.

Permission has been obtained to share the drawings with the public, which the Friends of Camp Security plan to do this Saturday, April 20 with a special exhibit at York County Heritage Trust, 250 East Market Street, York. There is no admission fee to view the exhibit, which is open from 9 a.m. to 5 p.m. (As an added bonus admission is free at all York County Heritage Trust museums and sites April 20 in conjunction with the Go Green in the City celebration.)

Artifacts found at the Camp Security site during a previous archaeological dig will also be exhibited. These coins, buttons, clasps, ceramics and other items will be shown alongside original documents of the time pertinent to the operation of this last undeveloped Revolutionary War prisoner-of-war camp in the United States. The items and most of the documents are on special loan from the Pennsylvania Historical and Museum Commission for this event.

The exhibit of the drawings, as well as the original artifacts and documents, is being held in conjunction with current efforts to raise the final funds to assure permanent preservation of this site, important to local, state and national history. More information on Camp Security and its history can be found at www.campsecurity.com. You can also follow Friends of Camp Security on Facebook.