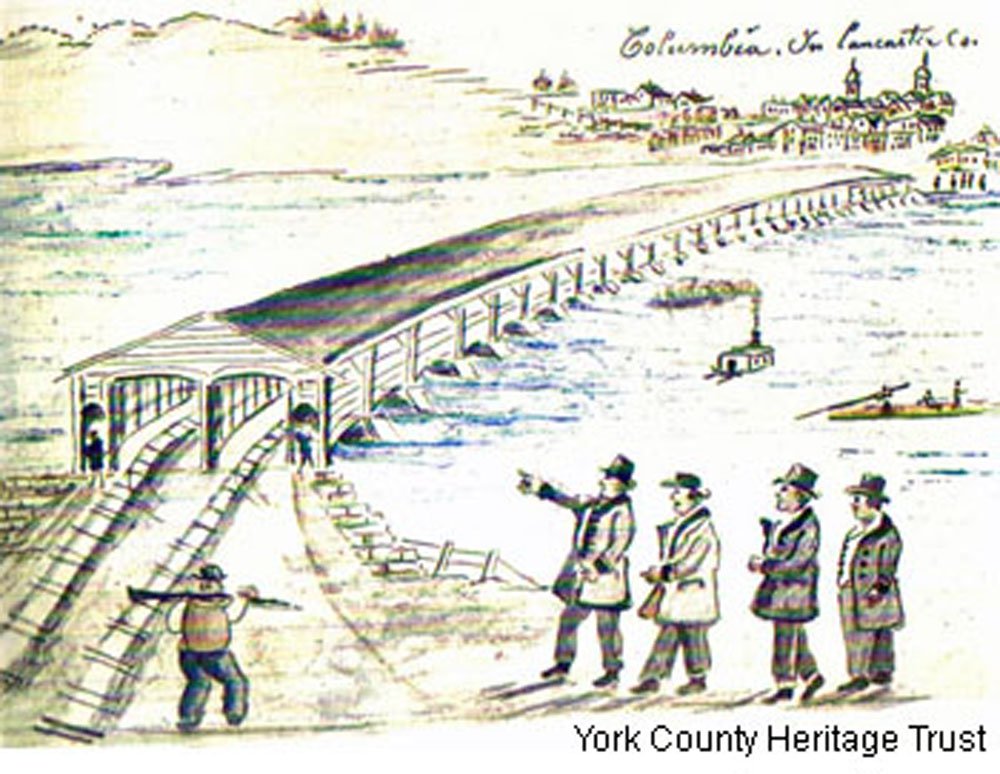 Bridges make our lives so much more convenient.
We have recently been hearing about the high cost of maintaining bridges. They are, of course, much more expensive to build from scratch.
Where would we be if we didn’t have the four bridges (Norman Wood in the south, two at Wrightsville in the middle, and Route 76 in the extreme north) that cross the Susquehanna River from York County?

We would be stranded on the west bank or waiting in an extremely long line for a ferry. Thinking about the absence of those bridges makes it clearer why York County has historically had more ties to Baltimore than Philadelphia. Besides being closer, it was much easier to get there, especially if you had a wagon load of goods to sell or ship.
Artist Lewis Miller, who had moved to Virginia to live with relatives, by this time, depicts his 1868 visit to Columbia with relatives to see the new bridge. The previous bridge had been burned to keep Confederate troops from advancing across it in 1863.
Miller’s caption reads: “Went to Wrightsville on the rail road cars, to the River Susquehanna, To See the New Bridge. Lewis Miller, and his nephew Lewis Miller, from Washington Terrytory, Peken, Clark County. In company with–Robert Craig and Jacob Quickel, in October 1868,–this is the third bridge build in my time over the river.”
Click here to read about a teenager’s memories of the Confederate invasion.
Click here to read about transportation across the Susquehanna.
Click here to read about the Road of Remembrance between Abbottstown and Wrightsville.
Click on the links below to read about Civil War in Hanover.
Civil War panic in Hanover.
Captain Jenifer, who caused the Hanover Civil War panic.
New York Civil War veteran wants Hanover wife.
Confederate sword found in Hanover.