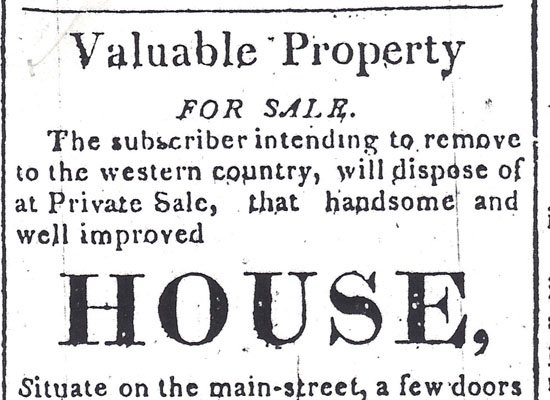 As you know, the southeastern/southcentral Pennsylvania area was settled early, and then, as families grew, some members spread out through the rest of the country from here. The western parts of Maryland, Virginia and North Carolina beckoned, as the settlers travelled down the valleys in quest of land. Some went more directly to western Pennsylvania, perhaps for Revolutionary War service land grants, and beyond, with whole counties in Ohio soon having a large population of former Pennsylvanians from York and Adams counties.

The ad below, from the April 4, 1816 York Gazette, shows that established businessmen went west too, probably to take advantage of the commerce that the pioneering farmers would bring.

“Valuable Property
FOR SALE
The subscriber intending to remove to the western country, will dispose of at Private Sale, that handsome and well improved
HOUSE
situate on the main-street, a few doors east of the bridge and opposite Mr. Nes’s corner. The house is two stories high, and did in the month of March and April last undergo a complete repair, and improvement; it has been newly painted both out and inside. There are in all nine rooms, exclusive of an excellent Kitchen, Smoke-house, brick paved yard, good and new stabling, with every other convenience to make it a desirable situation. Part of the house is at present occupied as a store by the subscriber & co., having new and complete shelving and counters—making it an object for persons of any kind. The terms will be made easy.
GEORGE NOBLE.
January 23.”

Noble had quite a sizable house and store. He is also stressing the location and the improvements and fresh paint. It’s not too much different from our real estate ads of today. Since the ad is still running more than three months after it was initially places, Noble hadn’t found the right buyer yet. It sounds like the establishment might have been on one of the corners of Main (Market) Street and Water (Pershing) Avenue.