My previous post showed that York County wasn’t immune to the silk culture mania running rampant in the 1830s. A few more examples of local residents getting caught up in the craze are below.

From the July 12, 1831 York Gazette:
“A specimen of silk produced this season under management of Mrs. C.A. Morris, has been shown to us—excellent quality.” This reference is to Cassandra Small Morris, who was a member of one of the leading families of the area, the sister of businessmen Philip Albright Small, Samuel Small and Alexander Small.

George R. Prowell’s History of York County, Pennsylvania relates this story of York Methodists:
“The congregation continued to worship in the original meeting house until 1836, and two years later sold the building and site to the First United Brethren Church of York. In 1833 the congregation purchased a lot at the northwest corner of Philadelphia and Beaver Streets. In 1836 a church building, with a lecture room, was erected on this site at a cost of $16,000. It was dedicated June, 1837, Rev. George Cookman officiating. In order to pay a part of the debt, the board of trustees decided to purchase mulberry trees to the amount of $400 and have them cultivated as a profitable investment. As early as 1835 silk culture had been introduced into southern Pennsylvania. Hundreds of people purchased the mulberry tree, technically known
as the Maurus Multocaulus. In 1840 the business had declined because the silk worm could not be successfully utilized in this climate and the Methodists lost money by their venture.”
According to one online calculator, that venture cost the Methodists close to $10,000 in 2016 dollars.

Recommendations in the lengthy report include asking the state legislature to protect “mulberry trees from the depredations of trespassers.” Other goals were to inform citizens of the importance of silk culture in the state and of immediately rearing worms and producing silk. Each county silk society was urged to hold fairs for “exhibition of articles and fabrics of silk or cocoons, with premiums.” It was also recommended that “managers of humane and charitable institutions in cities and towns establish mulberry orchards for gratuitous distribution of leaves to industrious poor, and that Directors of the Poor “introduce culture of silk among paupers and others under their charge.”

Little did the convention members know that the silk enthusiasm would soon be over. As noted by Prowell, the variety of mulberry trees best suited to feeding silkworms was not suited to our fickle climate. Harvesting the leaves and feeding the voracious silkworms was labor intensive; Residents didn’t have that kind of spare time, and cheap labor was scarce. Another factor was the speculation in growing mulberry saplings, as the York Methodists did; far too many were propagated, exceeding demand. Nursery trees that sold for $2.50 to $5 in 1836 reportedly could hardly be sold for a cent in 1840. York County, along with the rest of the Northeast, had to abandon dreams of riches pegged on a hungry worm. 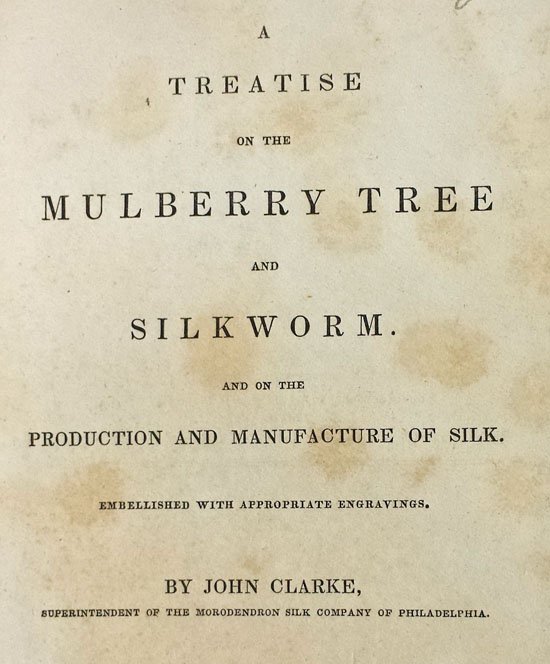